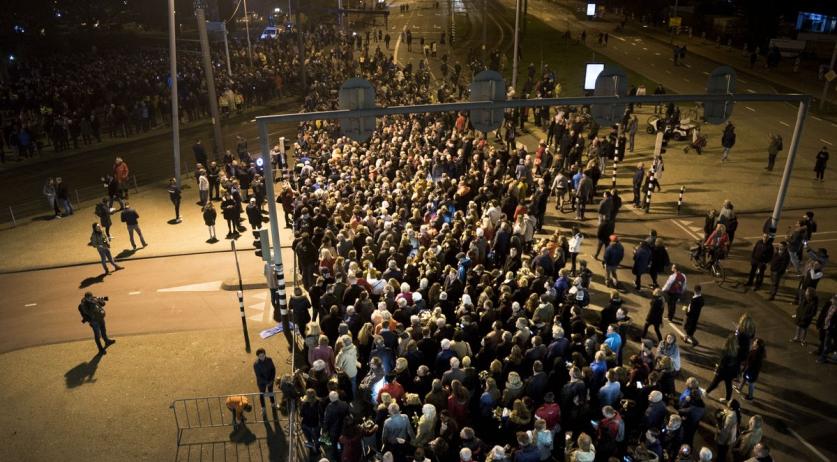 The victims of a mass shooting in Utrecht on Monday were commemorated with a silent march in the city on Friday. The 16 thousand attendees included Prime Minister Mark Rutte, Minister Ferdinand Grapperhaus of Justice and Security, Mayor of Amsterdam Femke Halsema, Den Haag mayor Pauline Krikken, and Rotterdam's Deputy Mayor Bert Wijbenga.

The commemoration started at 7:00 p.m. on Jaarbeursplein, behind Utrecht Central Station, with a speech by Utrecht mayor Jan van Zanen. "Last Monday was a day of fear, anger and sadness. A day that you never hope to experience," he said. "Now, four days later, disbelief and horror still dominate. Three people were killed. Two from Utrecht. One from the municipality of Vijfheerenlanden. Two people are still fighting for their lives. Others recover from their injuries. Witnesses try to process the images and their experiences," he said.

"That is why the city is quiet again today."

After a minute of silence, the participants walked towards the scene of the shooting on 24 Oktoberplein. There they left red and white flowers, the colors of the city of Utrecht. The thousands in attendance placed flowers at the memorial site, where a shooting took the life of three people and injured five others. A delegation of FC Utrecht supporters brought a banner reading "Utreg Buigt Nooit," or "Utrecht Never Bows" but reflecting the city residents' accent.

The silent march was initially organized by a group of Utrecht residents, but due to the massive interest the municipality decided to take over the organization. "With this march, people can share their feelings and emotions, and show respect and compassion to relatives and victims", the municipality said earlier in the week, NOS reports.

At around 10:45 a.m. on Monday a man opened fire on a tram on 24 Oktoberplein. Three people were killed, including 19-year-old Roos Verschuur from Vianen and Rinke Terpstra from Utrecht, a father of three children and a coach at football association DESTO in Leisdche Rijn. The third victim was a man from Utrecht, though no further details were released about his identity. Five people were also injured, three of whom seriously.

Suspected gunman 37-year-old Gokmen T. confessed to the crimes on Friday, according to the prosecutor. He was arrested on Monday evening after an hours long manhunt. He was arraigned on Friday and remanded into custody for another two weeks before the confession was announced. According to the Public Prosecutor, T. acted alone with "terrorist intent". "Furthermore, it is being investigated whether the accused acted solely for the sake of a terrorist motive, or whether his actions were based on personal problems in combination with radicalized ideas", the Prosecutor said on Thursday.

A day later the prosecutor's office said T. acted alone, and the three people previously arrested were not tied to any criminal acts.