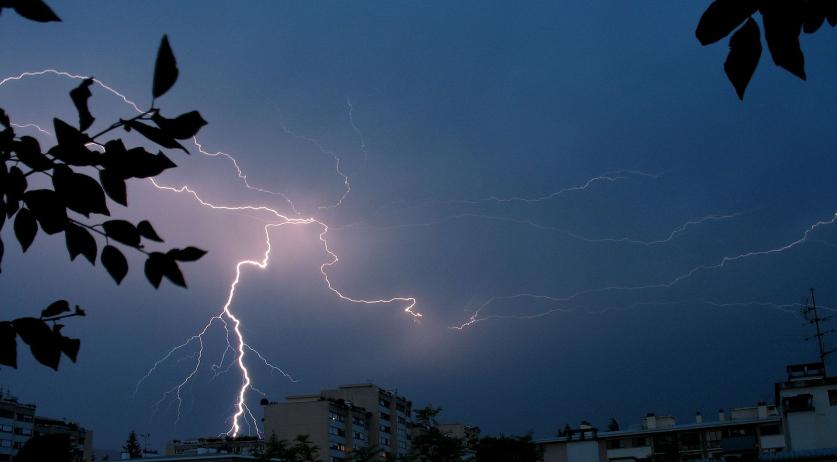 Multiple fires were caused by lightning strikes while thunderstorms raged across the Netherlands on Wednesday. No one was hurt in the fires. An 18-year-old student was struck by lightning at a military base in Ossendrecht. He was admitted to a burns center in Antwerp with burns and severe damage to his lungs, his school reported.

Thirteen other students, between the ages of 16 and 18, sustained minor injuries during the lightning strike, school Zadkine Veiligheidsacademie in Hoogvliet said to NU.nl. They were not struck by lightning, but were near the student who was. The group of students were participating in a security and inspection exercise when the storms reached them. The 18-year-old from Rotterdam hid under a tree, which was then struck by lightning. He was rushed to a hospital in Antwerp by helicopter, and later admitted to a hospital in the Belgian city that specializes in treating burns.

The other students were taken to hospital for examination, and were sent home during the course of Wednesday.

A lightning strike set a thatch-roof barn in Waspik, Noord-Brabant on fire. The barn was destroyed in the blaze, but the adjacent property could be saved, according to NOS. Lighting also set fire to a house on a holiday park in Cadzand, Zeeland and a home in Spijkenisse. The residents of the Cadzand holiday home were sheltered in the holiday park's main building while firefighters extinguished their home, AD reports. They were allowed back into their home after the fire was put out. The fire in the Spijkenisse home raged in the attic.

As far as is known, no one was hurt in the fires.

The storms also brought large hail stones with them. Social media was flooded with photos showing hail stones the size of ping-pong or golf balls, especially from Deventer, around Arnhem, and Twente.