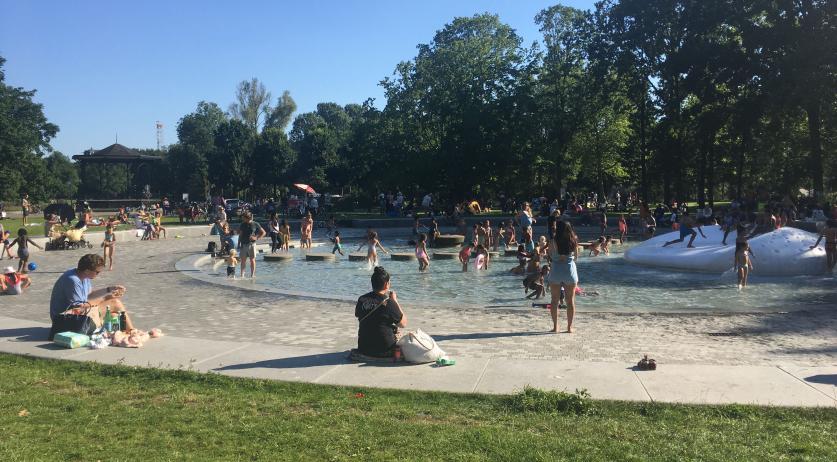 Dutch meteorological agency KNMI issued a heat warning covering most of the Netherlands through the start of Monday morning. Four southern and eastern provinces were covered by a code orange alert for sweltering heat, with the rest of the country under a less acute code yellow alert.

The more severe alarm was published for Gelderland, Limburg, Noord-Brabant and Zeeland, with the code orange in place from 9 a.m. on Saturday up to 5 a.m. on Monday. “From today it can become extremely hot, especially in the south and southeast, with maximum temperatures of 35 degrees Celsius or slightly higher,” the KNMI wrote.

While many of the country’s biggest cities were outside of the orange zone, people living in the most crowded municipalities were also told to be very mindful of the heat. “In urban areas elsewhere in the country, it can also reach 35 degrees Celsius,” the agency said.

“Pay extra care and attention to vulnerable people in your area. Take action: Drink enough. Keep yourself and your home cool. Limit physical exertion. Take water with you when traveling.”

The other Dutch provinces were mostly covered by a code yellow warning for the same time span. Neighbors and family members should still check in with those in vulnerable health, and the elderly and chronically ill should take measures to stay cool and hydrated. The code yellow regions to the central and north of the Netherlands were more likely to see partly cloudy skies with temperatures between 32 and 35 degrees on Saturday.

People and pets should not be allowed to sit in a parked car as the cabin of a motor vehicle can reach 43 degrees in just ten minutes when sitting idle where the outside temperature is 32. The interior of the car can hit 51 degrees after just a half-hour, even with the windows cracked open.

The National Heat Plan was still active for the weekend, said public health agency RIVM. Aside from the tips shared by the KNMI, the health agency also called upon people to wear sunscreen.

Only the Wadden Islands and the area immediately around the IJsselmeer were not subject to either heat warning.

Temperatures were not expected to fall significantly on Sunday, with the west coast peaking at 30 degrees, the eastern provinces at 33 degrees, and Limburg reaching 35 degrees Celsius. The high heat could continue through the middle of next week.

Those with dogs should not walk their pets during the hot part of the day to protect the soles of their paws and their skin from burning. Cats, dogs and other pets should be given shade and plenty of fresh water.

Each animal has its own warning signs that they are overheating. During last year’s heat wave, Dierenbescherming provided NL Times with tips for dogs, cats, rabbits, guinea pigs, hamsters, rats and birds. Anyone whose pet is suffering from heat stroke should quickly contact their veterinarian.