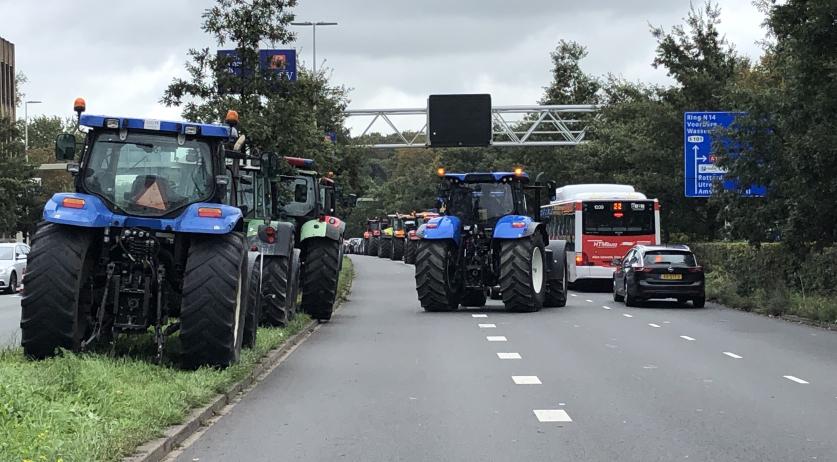 Parliamentarians believe that farmers crossed a line with their protests against the government's nitrogen policy over the past days. "If you want to visit an activist at home, if you prevent the Minister from doing her job, then we really no longer speak of campaigning or demonstrating, that is intimidation and that is unacceptable," GroenLinks leader Jesse Klaver said to NOS.

Farmers have been protesting since last week Thursday against Agriculture Minister Carola Schouten's plan to ban them from adding protein to their animal feed. In the agriculture world, protein is added to cattle feed as concentrates, but this also causes the animals to release more nitrogen. And the government is scrambling to cut nitrogen emissions wherever it can since the Council of State ruled last year that emissions caused by new construction projects can't be compensated for afterwards.

In protest, farmers blocked highways and supermarket distribution centers over the past days. On Tuesday, over a hundred farmers with tractors went to the Nijmegen home of environmental activist Johan Vollenbroek. The police had to intervene. On Wednesday, a group of farmers prevented Minister Schouten from completing her work visit to Zeeland by blocking the road with tractors.

"In recent weeks I have regularly looked with amazement at how far those protests were allowed to go. It is good that many mayors are now drawing a line," D66 leader Rob Jetten said.

"Protesting and demonstrating is a good right, but it should never lead to threatening or dangerous situations," said VVD parliamentarian Helma Lodders.

In an effort to prevent dangerous situations, Friesland, Groningen and Drenthe banned demonstrations involving agricultural vehicles until at least Monday. Dozens of people were arrested in Drenthe on Wednesday for violating this ban. A group of farmers blocked access to a waste processing company in Wijster.

"We have seen time and time again that these tractors are used to intimidate," Koen Schuiling, mayor of Groningen and chairman of the local security region, said to the broadcaster. "Farmers who have a slightly different opinion are also intimidated. We see that people ignore every rule and every agreement. We now saw that again in Wijster. People don't want to realize how dangerous that is."

The protests also led to other dangerous situations over the past days, Schuiling said. "People have blocked roads that must remain open for ambulances or the fire brigade. People have positioned trucks so that the hospital was no longer accessible. I find it unacceptable."

Action group Farmers Defense Force will be fighting the ban against tractor demonstrations in court on Thursday. The group calls the ban a curtailment of their right to demonstrate. But according to Schuiling, the three northern provinces aren't preventing anyone from demonstrating - only from using their tractors and other agricultural vehicles to do so.