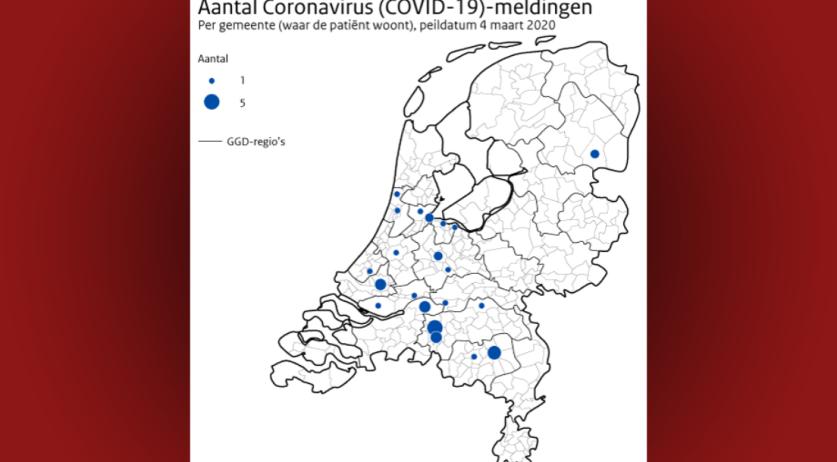 Fifteen more people in the Netherlands tested positive for coronavirus Covid-19, bringing the total number of diagnoses in the Netherlands up to 38, public health service RIVM said on Wednesday. Four of the new patients are in hospital, the other 11 are quarantined at home. One patient was traveling through the Netherlands and was offered accommodation for their quarantine period.

On Tuesday night, the Ikazia Hospital in Rotterdam and the Jeroen Bosch Hospital in Den Bosch both reported that they each had one patient who tested positive for Covid-19. The Red Cross Hospital in Beverwijk stopped admitting patients to its ICU due to a possible coronavirus infection. The Diakonessenhuis in Utrecht on Wednesday reported that it had two patients who may be infected with the disease. Which of these patients fall in the RIVM's confirmed cases, is not clear.

The hospitals treating Covid-19 patients are working wit their local municipal health service (GGD) to map out exactly who the patients were in contact with. The GGD is also doing this with patients in home quarantine. All contacts will be asked to monitor their health, and contact the health authorities if they start showing symptoms.

An employee of the OLVG hospital in Amsterdam's first test for the virus came back positive, the hospital said on Wednesday. Whether this hospital worker is included in Wednesday's confirmed figures, is not clear.

The RIVM launched an interactive map, showing where the coronavirus patients were diagnosed, so that  Netherlands residents can better track affected areas. According to the map, the Noord-Brabant village of Loon op Zand had the most confirmed diagnoses at five. Four of these are the Netherlands' first Covid-19 patient, his wife and daughter, and his brother.

The second patient of the Netherlands, an Amsterdam woman currently living in Diemen, and her husband are two of the five Covid-19 patients in the Amsterdam region. An initial test showed that the couple's youngest child also had the virus, but further testing revealed that this was not the case. The other three confirmed cases are one each in Amsterdam itself, Gooise Meren, and Blaricum.

There are four Covid-19 patients in Helmond, three in Altena, three in Rotterdam, three in Tilburg, two in Utrecht, two in Coevorden, and one each in Haarlem, Oss, Alphen aan den Rijn, ​Beverwijk, Delft, Houten, Eindhoven, Hardinxveld-Giessendam, Hoeksche Waard, and Zaltbommel, according to the map.