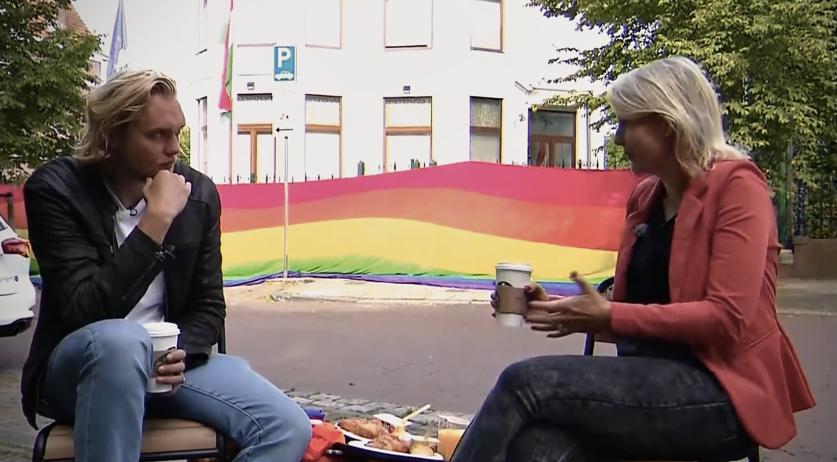 Giant rainbow flag unfurled at Hungary Embassy in The Hague

The members of Dutch podcast FC Afkicken unfurled a gigantic rainbow flag at the embassy of Hungary in The Hague on Friday while presenter Joost Hofman was interviewing D66 parliamentarian Jeanet van der Laan about the anti-LGBTQ+ laws set to be implemented in Hungary, and the response in the football world. Van der Laan is also a retired professional footballer who played in 29 matches for the Dutch women’s national team.

"In the Netherlands you can be who you are and love whoever you want. The new law in Hungary goes against the rights of these people and so I think it is very good that people from other countries are raising a voice against this law. I therefore hope that the ambassador will come out, so that we can make it clear that this is simply not possible. We do not accept this law," Van der Laan said on the podcast.

She also praised the Dutch men’s football captain Georginio Wijnaldum, who will wear a special #onelove armband during the Oranje Euro 2020 match against the Czech Republic in Budapest on Sunday.

People in the football world, currently in the midst of the 2020 European Championship, also took action against these new laws. After UEFA banned Germany from lighting the stadium where it was playing against Hungary on Wednesday in rainbow colors, the country and the Netherlands lit various other football stadiums and landmarks in the colors adopted by the LGBTQ+ community.

"If UEFA continues to act like this, things will not go well," the D66 parliamentarian said on the podcast. "They are the people who have to change the rules. You can't make a political statement, I understand that. But this is simply about human rights. You can absolutely commit to that."

On Thursday, Hungarian Prime Minister Victor Orban received a very stern talking to from the majority of the other EU leaders in an emotional summit on these new laws. Dutch Prime Minister Mark Rutte even challenged him to start the procedure for Hungary to leave the EU if the country "does not want to adhere to the values and standards of the union".

Van der Laan has only held her position in the Tweede Kamer for three months after D66 had a strong performance in the March general election. During that time she took the lead in her party to draft a bill banning the controversial practice of gay conversion therapy in the Netherlands after the Cabinet dragged its feet on the issue, to the irritation of LGBTQ advocates.

By the end of the podcast, the flag was removed from the fencing as Dutch police officers remained on hand to keep the situation peaceful.