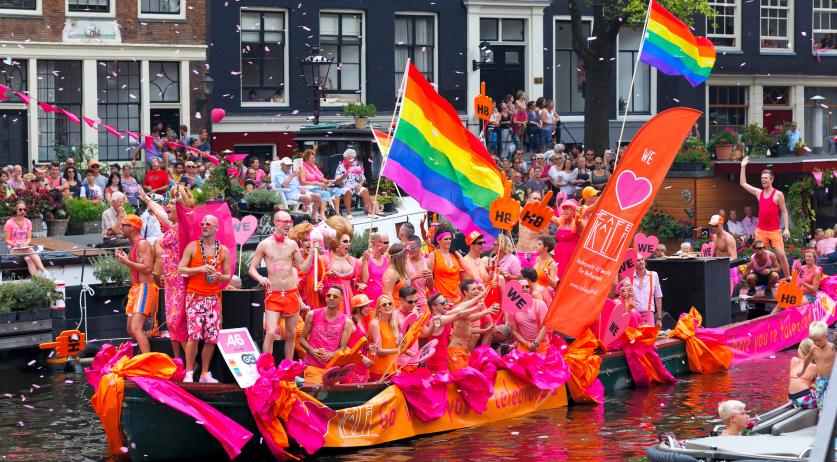 Amsterdam’s Pride parade canceled for second year in a row; Other events planned

The annual Pride Week celebration in Amsterdam will take place this year, but its most famous highlight, the parade on the Amsterdam canals, was canceled for the second year in a row. The organization said social distancing requirements made it impossible to organize the parade safely, but could possibly be guaranteed for other events with the theme “Take Pride in Us.”

"With the one and a half meter measure and testing for access, the boat parade is unfortunately not an option," the director of Pride Amsterdam, Lucien Spee, stated. This year's Pride will take place from July 31 to August 8, marking the 25th anniversary of the event. Spee said the organization was working with the municipality to find "the most feasible" alternative program.

He added that he was hopeful that Pride Park, some parties, and small-scale events would still be allowed to take place. "This means that we look into all factors and determine how we can proceed responsibly with the measures applicable at that time," Spee explained. The organization was also looking at how it could hold Pride Walk in a way that fit in with coronavirus restrictions.

Amsterdam Mayor Femke Halsema informed the city council about the decision on Monday. According to her, it is not certain what restrictions and measures will be in force at the end of July and the beginning of August, "but there is a considerable chance that they will make the organization of a metropolitan event with a free influx of visitors almost impossible."

"It is important for the municipality that this decision provides greater certainty that Pride Amsterdam, the event so important to the city, can take place in 2022, including the iconic boat parade," said Halsema, NH Nieuws reported.

The regular boat parade and parties were also canceled last year due to the coronavirus pandemic. An alternative program was put together featuring a demonstration march against anti-LGBTQ violence, which was later also canceled.

The final program of this year's Pride event will be announced at the beginning of July.

“With Pride we celebrate the difference, the love and the freedom to be who you want to be,” said city alderman Rutger Groot Wassink. “Acceptance and emancipation starts with being visible. That is why it is very important that our city comes together again to celebrate diversity and draw attention to everyone who does not have this freedom.”