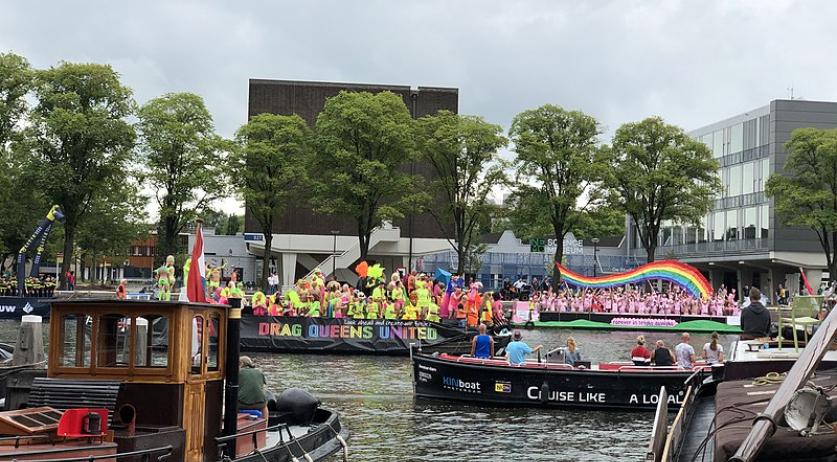 As the coronavirus and measures in place to curb its spread made Pride Amsterdam impossible this year, the organizers decided to put together an alternative program to be enjoyed largely from home. The main event, to be held on the day of the Canal Pride Parade on August 1, is a protest against homophobia and transphobia, with a march from Museumplein to Dam Square, the organization announced on Wednesday.

For those unable to take part in the Pride Walk, people will be encouraged to walk a five-kilometer route from the Homomonument to the Westerkerk that winds past places of importance to the LGBT+ community. An app will provide walkers with information along the route, with people on the lookout for the flags which represent all groups within the Pride community.

“Visibility of sexual and gender diversity is very important for the emancipation of our community,” said Lucien Spee, the head of Pride Amsterdam. “We therefore cannot afford to skip a year. Continuing to draw attention to our message is essential, as is constantly working towards the acceptance of the LGBT+ community. At the same time, we also want to offer our community something during the Pride period."

From July 25 to August 2, the Pride Amsterdam program will be broadcast daily on local Amsterdam broadcaster Salto and on Pride TV, and OUTtv, KPN and Ziggo may also take part in broadcasting. The day program will run live between noon and 7 p.m. from the OBA public library theater on Oosterdok. The program consists of performances and conversations with special guests and viewers.

In the evenings and nights, the program will be a "party mix on television" with guest DJs and Pride video clips to "support private parties in the small circle," Pride Amsterdam said.

On the street, attention will be drawn to Pride Amsterdam with portraits of people who play an important role in the event shown on bus shelters. There will also be an open-air exhibition on Dam square, consisting of the flags of 73 countries where homosexuality is still a criminal offense.

"Flags of Shame" will be visible in the Dam from July 25 through August 2.