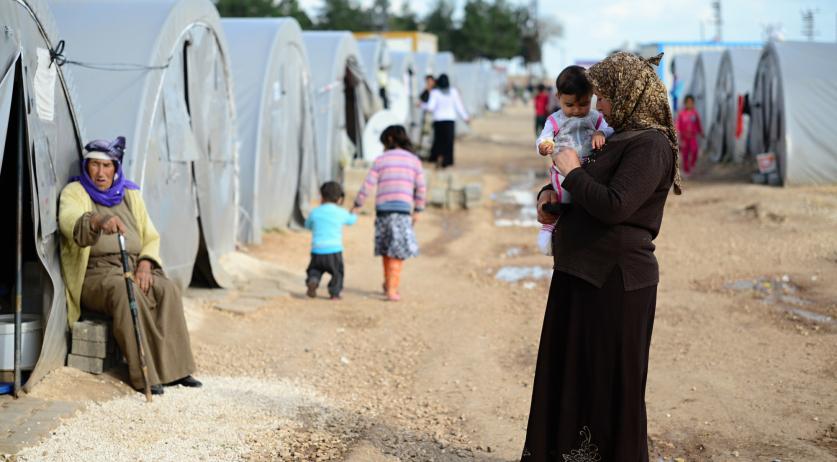 Netherlands does not have to help kids trapped in Syria: Appellate Court

The Netherlands will not have to retrieve children of Dutch citizens awaiting their fates in Syrian detention and displacement camps, the kids of Dutch women who left the Netherlands to enter conflict zones in Syria and Iraq. The Appellate Court in The Hague overturned a lower court's ten-day old order on an emergency appeal filed on behalf of the Dutch government by the Ministries of Foreign Affairs and Security & Justice.

The families of the 56 kids involved in the court case left the courtroom in stunned silence, according to broadcaster NOS. They made no comment following the ruling.

In a ruling issued on Friday soon after the hearing had ended, the court essentially agreed with the Dutch government's primary argument that the issue is one of political policy and does not contravene the Dutch rule of law, according to broadcaster NOS. As such, the government argued, it should remain an issue to be dealt with by the Cabinet and Parliament.

Earlier this month the court in The Hague ruled that the Netherlands has the obligation to try and bring the 56 children of Dutch who went to join terrorist organizations in the Syrian civil war back to the Netherlands. These kids are currently staying in refugee and detention camps in Northern Syria. The obligation to bring the children to the Netherlands does not extend to their 23 mothers. But if the Kurdish camp guards will only give up the children if their mothers go along, the Netherlands must also take the mothers back, the court ruled. The court also added that the situation at the camps must be safe enough for Dutch soldiers and officials to go get the women and children.

The Dutch government appealed against this ruling. The case was brought before the Appellate Court just after 10 a.m., with each side given an hour for arguments and an hour for rebuttals.

Attorneys for the Dutch government argued that children cannot be brought to the Netherlands on their own for fear of causing greater problems within the families. “If only children arrive, resentment can arise among women or family members here, which is also a risk,” the government argued, according to a court reporter for AD. The line elicited a defiant laugh from family members present in the courtroom.

In his opening statement, André Seebregts, representing the 23 women and 56 children in the appeal, wanted to know why it was so impossible for the Dutch government to pick up the children it was ordered to collect if the Danish government was able to rescue an orphaned child there just days ago. Indeed, he said, the government should have collected the women and children well before this week, as the camps where they are being held are likely to be taken over by Bashar al-Assad and the Syrian Army. This could subject the Dutch citizens and their children to torture.

It was somewhat of a jab at the Dutch state’s argument that the children present in the camps, while suffering a sad fate, are not unique as there are millions of children in similarly tragic situations in Syria alone.

The government also said that the mothers of the children who were involved in the conflict are potential threats to national security, having spent years in the conflict area voluntarily, and not necessarily wanting a return to the Dutch way of life. Even those women who departed for Syria before the rise of the Islamic State there knew they were settling into a country being affected by jihadists, and thus have to live with their decision.

Attorney Tom de Boer countered this, saying that expert after expert has said it is far safer for the Netherlands to collect the children and bring them to Dutch land as opposed to leaving them in Syria where they are more likely to be radicalized. It is entirely possible they might attempt to carry out an attack on the country, De Boer said, according to AD.

The government's stance has always been that it is up to the women to report to a Dutch embassy or consulate in Turkey or Iraq if they want help in getting their children and themselves back to the Netherlands. The problem with that argument is that it is difficult for women to do so on their own - the camps they are living in are guarded and they can only get to Turkey or Iraq with the help of traffickers, according to AD.

About 140 Dutch people are being held in camps in Northern Syria, according to intelligence service AIVD. It includes about 85 children, 40 women, and 15 men.

Children's Ombudsman Margrite Kalverboer has made multiple calls on the Dutch government to bring these children back to the Netherlands, expressing concerns for their wellbeing and development. In June, special UN envoy for Children in Armed Conflicts, Virginia Gamba, called on the Dutch government to "show grace and mercy" and bring these children home.

The Dutch parents of children who went to become rebel fighters in the Syrian civil war also established a foundation called Achterblijvers with the goal to convince the Dutch state to bring their children and grandchildren back to the Netherlands. "Of course our children will have to account here for what they did and to prevent them from doing anything dangerous here. But we don't want our grandchildren, like the children of NSB people 70 years ago, to pay for the actions of their parents", a prominent member of the foundation said to the Volkskrant in April.