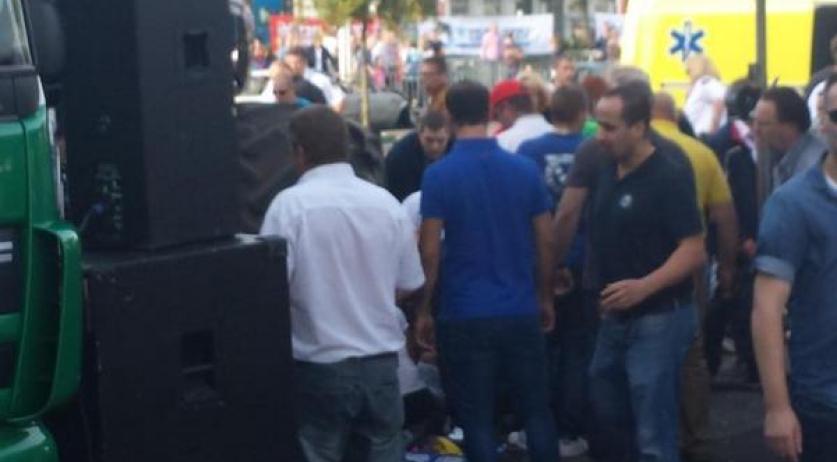 Dozens of adults and children were injured Sunday at an automotive exhibition when a driver lost control of his monster truck, crashing into the attendees gathered at the Haaksbergen, Overijssel event. Police say two people lost their lives, though Mayor Hans Gerritsen said three people are dead. It was previously reported that at least one of those dead is a child. Sources at the scene say about 40 victims were being triaged at the scene. Emergency services called for all available medical personnel in the area to assist first responders. Video from the scene (see below) shows the driver gunning the truck's engine before powering over half a dozen cars. The engine revs hard after the truck's rear wheels clears the last car, and the truck hits the pavement hard, before careening around a curve, jumping a metal railing and crashing into a crowd. The first call to emergency services came just after 4 p.m. The crowd looks to have been corralled approximately three or four truck lengths from the main exhibition area. People were attending the AutoMotorSportief on Stationsstraat in the center of the small town. "A lovely, festive afternoon ended in drama," said Deputy Mayor Peter van Vlaanderen. "This is a disaster for Haaksbergen." The truck is sponsored by Dutch firm Eurol, a manufacturer of industrial lubricants. The truck is part of the stunt team the company funds. Emergency services raised the alarm to a third-degree regional incident (GRIP 3), normally reserved for when a municipality is affected by an incident. By ordering the GRIP 3 alarm, the National Crisis Centre, interior ministry, and commissioner of Overijssel have all been notified. Haaksbergen sits in the Netherlands' Twente region of the Overijssel province. It is bordered by Enschede to the north, and Germany to the east. http://www.youtube.com/watch?v=P5wXkICqAEs https://www.youtube.com/watch?v=51l743LcMx4