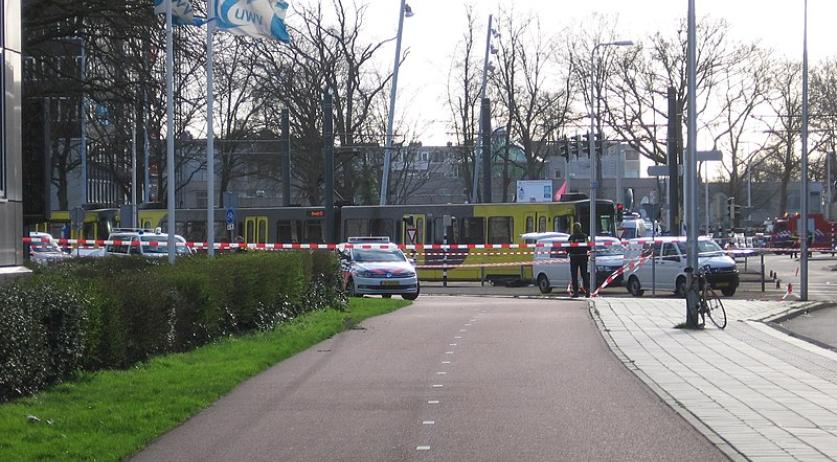 Cordon by the police of the 24 Oktoberplein, Utrecht, after the tram attack on March 18, 2019 - Source: Hansmuller at Wikimedia Commons - License: CC-BY-SA
Crime
Politics
Utrecht
terrorism
terrorist attack
Share this:

The risk of the attack in Utrecht tram in 2019 could have been reduced, the Justice and Security Inspectorate concluded following an investigation into what led up to the tragedy. 37-year old Gökmen Tanis killed four people and injured dozens of others in a mass shooting on a tram in the fourth largest Dutch city in March 2019.

He was later convicted of murder with terrorist intent, and multiple counts of attempted murder, and sentenced to life in prison.

The Inspectorate said that the police, the Public Prosecution Service (OM) and the Custodial Institutions Agency (DJI) had not paid enough attention to the perpetrator in the run up to the mass shooting even though he was already well know to them as a potential threat to society, Nu.nl reported.

The investigation found that the authorities failed to gain a "better and more complete picture of the culprit" before the attack was carried out. The Inspectorate emphasized that this does not mean that the particular attack could have been prevented. "Risks can never be ruled out, but it is important to make them as small as possible," they stated.

The inspectorate was also critical of the crisis response in Utrecht after the attack. The municipality advised residents to stay inside after the attack took place and the perpetrator fled. But because relevant information was shared between the relevant policing and security organizations too late, the municipality was unable to give clear advice to its residents about what they should do.

Due to poor communication, cafes and other places which could provide shelter closed their doors, which meant that guests ended up on the street. Furthermore, according to the Inspectorate, it was too late to readily scale up to an organized crisis response, and there was plenty of confusion among the police members about the procedures they needed to follow.

Outgoing Justice and Security Minister Ferd Grapperhaus states that the conclusions from the evaluations and analysis of the Inspectorate are being looked at. Grapperhaus also said that concrete steps have been taken since the attack which was meant to improve the follow-up and response to signals of extremism and radicalization.

"Conversations with various relatives and victims have left an indelible impression on me. It also strengthens my intention that in our constitutional state we must do everything we can to prevent similar events in the future," said Grapperhaus.

National police head Henk van Essen stated that police have also taken steps to address the issues found in the evaluation. “In recent years we have worked on further professionalizing our response when such violence does occur.“

“Yet there are still lessons to be learned for the police as well," he concluded.