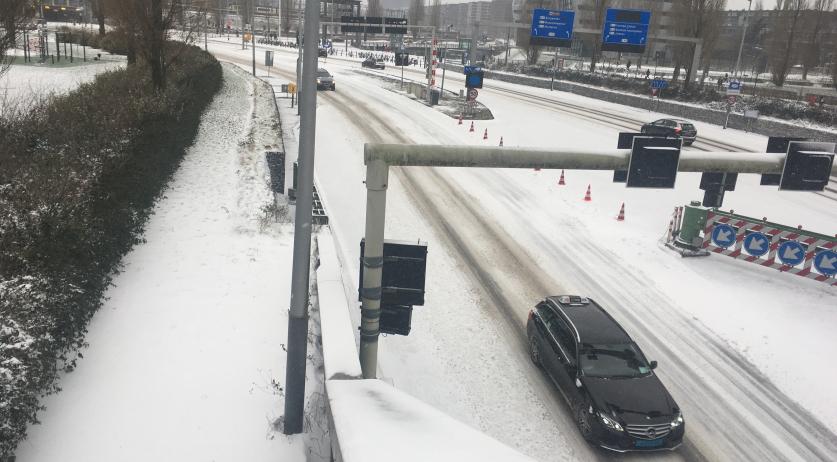 While the weather will be slightly less winter-wonderland than on Monday, snow and icy temperatures are also expected to affect all forms of traffic in the Netherlands on Tuesday. According to meteorological institute KNMI, the southern parts of the country got so cold overnight that salt gritters had no effect.

KNMI has a code yellow warning in place for the entire country for the entire day. Motorists in all provinces must be careful of icy and slippery roads. "Adjust your driving behavior. Follow weather reports and warnings."

For Limburg, Noord-Brabant, Gelderland, and Overijssel, the meteorological institute also has a code yellow warning in place for severe cold. Up until late morning, ambient temperatures may dip to -20 degrees in these provinces.  "With long exposure there is a risk of hypothermia and cold injuries. Pay extra care and attention to the vulnerable people in your area such as the homeless, children, the elderly, and the chronically ill. Wear good, layered clothing," the KNMI said.

Public works department Rijkswaterstaat also warned motorists to be careful of slippery roads. "Hopefully the roads will be a bit more accessible, we will do our best for that, but continue to be alert. Just shoveling snow won't do it, and making the road ice-free takes time," spokesperson Suzanne Maas said to NOS.

Rail company NS announced that due to the extreme cold, only sprinters will run on Tuesday. "Plan your journey shortly before departure," the rail company advised. And check the NS travel information before you leave.

Tuesday is expected to be sunny and dry, with only the Wadden area seeing some light snow. Maximum temperatures will range between just below freezing on the Wadden to -6 degrees Celsius in the southeast.