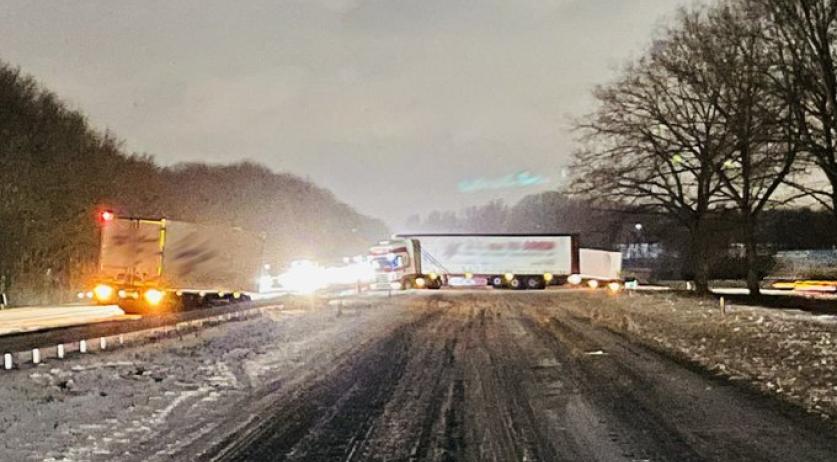 The snowy weather affected all forms of traffic in the Netherlands on Monday morning. Motorists were advised to avoid the roads, due to iciness and slickness. NS reported that only a few trains were running. And flight delays were expected. Meteorological institute KNMI has a code orange weather warning in place for the entire Netherlands.

The code orange warning is in place until noon, after which it will switch to code yellow through to the end of Tuesday. "Extensive slippery conditions due to iciness, snow dunes and snow on the roads," the KNMI warned. "Major risks for road users. Adjust your driving- and travel behavior. Take into account longer travel times on the road and in public transport. Follow weather reports and warnings."

Rail company NS reported that the heavy snowfall and wind caused many disruptions on the track on Sunday, and that was expected to continue into Monday. "NS and ProRail are doing their utmost to have trains running today," the rail company said. "At the moment we cannot give you any certainty about the number of trains, the routes and frequency." But few trains are expected to run.

Public works department Rijkswaterstaat urgently advised motorists to avoid the roads on Monday due to dangerous driving conditions. Multiple lanes at the Drecttunnel on the A16 towards Breda are closed, as the slipperiness is making it very difficult for drivers to get onto the service road if their vehicle is too tall to enter the tunnel. The A7 highway is closed towards Hoorn between Middenmeer and Medemblik. Several lanes in the other direction are also closed, between Middenmeer and Den Oever. And there were multiple reports of trucks jackknifing on the A50 near Ravenstein. The highway there is closed in both directions.

Travelers association ANWB said that there were few reports of traffic jams in the bumper-to-bumper sense, but the weather was definitely slowing everything down. "Do not take the road if it is not strictly necessary." By 7:25 a.m., the association reported seven traffic jams covering 45 kilometers of Dutch roads.

On Sunday, Schiphol warned that the weather was causing delayed and cancelled flights. By time of writing, the airport had not said anything about the weather impacting flights on Monday, but a handful of cancellations and delays were reported on its website.

A number of taxi companies also reported that they would not be transporting passengers on Monday due to the dangerous driving conditions.