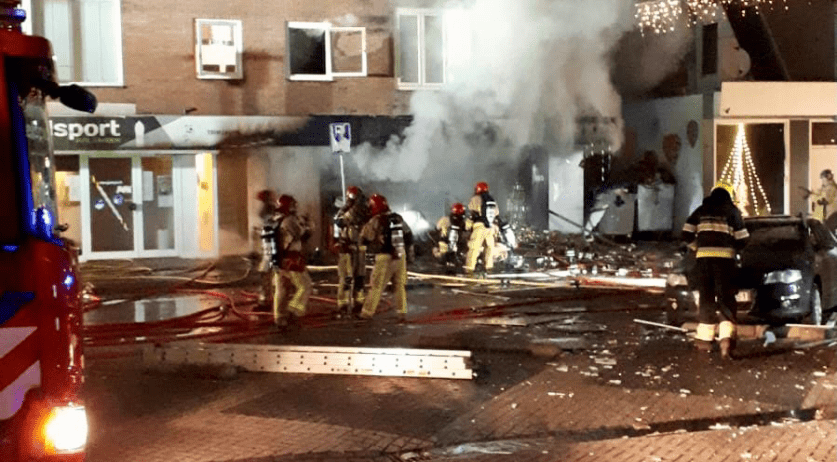 Explosions destroyed two Polish supermarkets in separate cites during the early morning hours of Tuesday. There were no injuries, and dozens of residents were evacuated as part of the emergency responses.

Police did not immediately report a connection between the two incidents, which were separated by a distance of 100 kilometers.

The first was reported just after 3 a.m. on the Ophelialaan in Aalsmeer, Noord-Holland after the blast rocked the neighborhood. Witnesses told first responders that an initial explosion was followed by several smaller bangs.

A statement from the fire department noted that the Biedronka supermarket, a residence, and a car parked in front were completely destroyed. They evacuated several homes above the store during their response.

Two people were tended to by paramedics at the scene and were not transported to a hospital. A cat did not survive.

The fire alarm was elevated to a larger response just before 3:20 a.m., and was declared a regional Grip 1 emergency at about 3:45 a.m. The declaration is meant to align all emergency service workers involved, with a single incident commander appointed to call the shots. The fire was struck out at about 4:20 a.m.

An explosives disposal team (EOD) from the military remained on the scene a few hours later. A statement sent to NL Times by the well-known Biedronka supermarket chain based in Poland noted that the Aalsmeer store was not affiliated with their business.

Explosives experts were also sent to the Polska Sklep at the Raadhuispaza strip mall in Heeswijk-Dinther, Noord-Brabant, police said. Photos from the seen show the facade of that shop completely blown out.

It was called in around 4:15 a.m. as a moderate fire. A fire department spokesperson said that 20 residents were evacuated as part of their response.

There was a great deal of damage at the location that also affected neighboring stores, and a restaurant and pharmacy across the street, according to broadcaster NOS. By 6:30 a.m., the police said that they ruled out the risk of another explosion.

“Experts are checking whether the construction of the apartment complex was damaged. From this, we will decide whether the evacuated residents can return home,” police said.