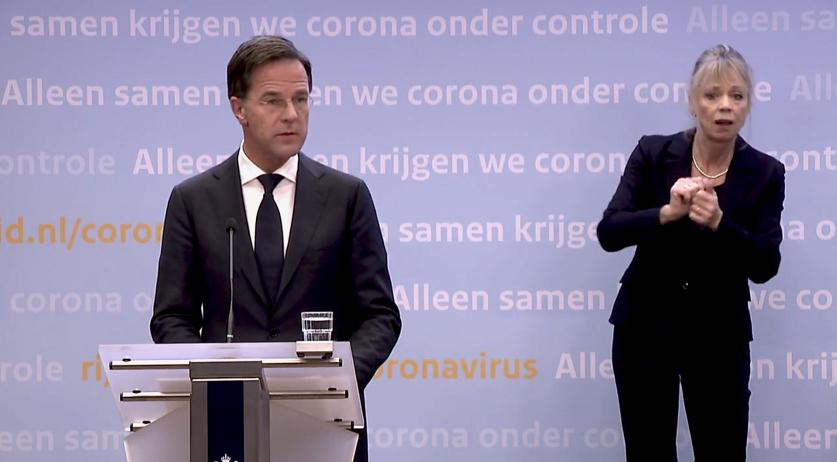 Some coronavirus measures relaxed from Thursday; Corona infections need to fall by 70%

NL Times has published a full list of all coronavirus restrictions which will be enforced from 12 a.m. on Thursday.

The specific rules to fight the SARS-CoV-2 coronavirus pandemic which were put in place on November 4 as an enhancement of the partial lockdown announced weeks earlier will be relaxed once Wednesday comes to a close. Additionally, some people will only have to self-isolate for just five days instead of ten days starting on December 1, which is also the same date that face masks will be mandatory at all indoor public spaces.

"The figures are still too high, but the trend is downward, which is positive," Dutch Prime Minister Mark Rutte said at an hour-long press conference on Tuesday. "The figures show that the measures are working, or actually that our behavior is working."

As expected there was no specific mention of what rules would be in place during Christmas and New Year's Eve. "We hope to be able to take a cautious intermediate step in mid-December. There is a great need to celebrate Christmas," Health Minister Hugo de Jonge said. "More will become clear about this at the beginning of December."

De Jonge said one specific national goal is to reduce the number of coronavirus infections from about four thousand daily to about 1,200 per day to make more space in healthcare for people who do not have Covid-19. "We are in the third risk level with the majority of regions. The [second] wave will only really be behind us when we are back at the first risk level," he stated.

Neither politician wanted to commit to the possible reopening of bars and restaurants, which have not been allowed to host customers since the partial lockdown began on October 14. De Jonge said it would be "irresponsible" to suggest that the businesses could reopen soon. The number of infections will need to fall further, he reiterated, as will the number of Covid-19 patients admitted daily into intensive care. The seven-day rolling average of ICU admissions stood at 34 on Tuesday, according to data from the LCPS. De Jonge wants that to drop to 10.

"Better not to say anything about it now, because we just don't know. We have a high number of contagious people which is not dropping enough to talk about it now," he stated. The RIVM estimated on Tuesday that there were about 118 thousand people in the Netherlands contagious with the virus, and every hundred of them will infect 89 others.

"We will be dealing with robust measures until it is justified to relax them further," De Jonge said. He wanted to avoid repeating the summer mistake of loosening restrictions too quickly. "The goal is to return to risk level 1, which we expect in mid-January."

A handful of rules relaxed on Thursday

From Thursday, some of the rules which will change include the reopening of publicly accessible buildings, like cinemas, theaters, museums, sex clubs, and swimming pools. Zoos and theme parks affected by the stricter rules will also be able to re-open. Up to 30 people, including children, will be allowed to gather in indoor spaces where seating is required.

Adults and children 13 and over will be able to spend time with others outdoors in groups of up to four. The same group size is valid for people who want to work out together. Those aged 13 and under do not count towards those group sizes.

At home, residents will also be allowed up to three visitors per day, instead of two. "At the moment it is clear: for Sinterklaas it remains the case that a maximum of three people may be welcomed at home. Christmas, however, is still weeks away, so it will take more time. Hopefully, we can say more about that around December 8," Rutte said.

Quarantine period reduced for some

Starting in December, those who enter into quarantine after having come into contact with someone known to be infected with the virus will only have to remain in quarantine for a period of five days. This refers to people who receive a notification from the government's Coronamelder tracking app, or from the GGD municipal health service during a source and contact investigation.

After five days, they can report for a coronavirus test. A negative result means that person may leave their self-isolation, De Jonge said.

Since the last prime time press conference, the effectiveness of a vaccine candidate from Pfizer was estimated at 90 percent, and another from Moderna was believed to be 94.5 percent effective. The European Union has deals with six potential SARS-CoV-2 vaccine manufacturers in total.

"But we can only use them if the test phases have been successfully completed, and if it appears that if the vaccines are effective and safe, the first vaccinations could take place as early as the first months of 2021," he said. "We will not compromise on testing and verification. If it is not safe or effective, we will not use it," he stated.

He also added that it was very important that at least 70 percent of the population be vaccinated against the infection. "A vaccination will not be mandatory, but you will hear us every day of the week about how important it is because it is the most effective method of defeating the virus."

Until that time, rules like the 1.5-meter social distancing measure will remain in place.

"As soon as the vaccine is available, and we can start rolling it out, that is the best route back to the old normal," Rutte said. "We predict that the long-term perspective will include the vaccine in combination with more and better testing, and also better medicines."