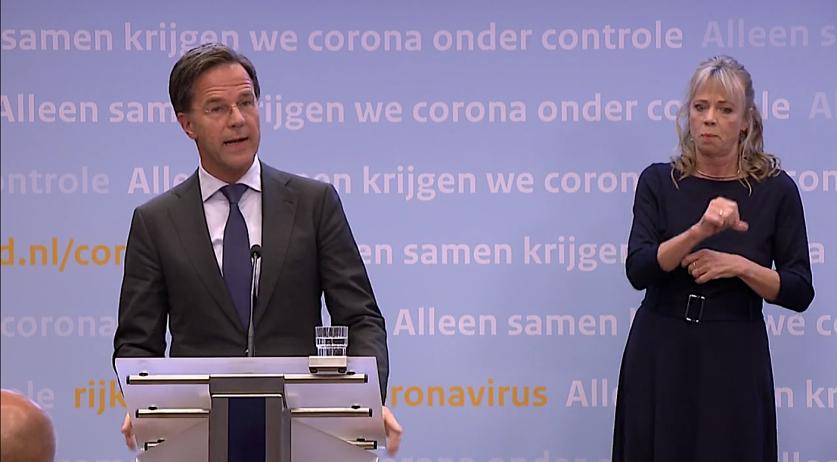 The Netherlands will enter a partial lockdown for a period of four weeks beginning on Wednesday at 10 p.m. in an attempt to reduce the impact on the healthcare sector, so that care unrelated to coronavirus and Covid-19 can continue, said Prime Minister Mark Rutte at a press conference on Tuesday night. "We do not want a repeat of what we experienced in the Spring," Rutte said. "In fact, we are going to a partial lockdown."

"We want to settle the face masks discussion once and for all," Rutte said. "A non-medical face mask will be mandatory for everyone over the age of thirteen who is in an [indoor] public space, as soon as it is legally feasible," he stated. For now, face masks are "urgently advised" while the government scrambles to make them legally mandatory.

"It is up to us all. Don't be the stubborn person who pushes the boundaries of the rules."

The new restrictions, like the closure of all restaurants and bars, the cancellation of many amateur sports, and the prohibition of all events will go into effect on Wednesday. They are meant as a hammer-like blunt tool as a response to the dramatic escalation of SARS-CoV-2 infections in the Netherlands, which neared 44 thousand in the past week. The current Covid-19 patient total in medical facilities has also doubled in just two weeks to 1,410, the equivalent of nearly five full regional hospitals. Standing with Rutte, Health Minister Hugo de Jonge said it the data clearly shows "what exponential growth looks like," saying that infections will double within two weeks if nothing changes.

Should the situation worsen, "a total lockdown is inevitable, but that should not be necessary as we can do this ourselves," De Jonge said. "The fastest way to get rid of measures is when we just stick to them."

"If we do this now, we can have a bite to eat and a beer again as soon as possible. In two weeks we will see where we are," Rutte said.

The government will not make any changes regarding education for the time being, but it will strictly enforce a maximum of groups of four people who do not belong to the same household, regardless of meetings held indoors or outdoors. Within a home, no more than three guests are allowed, and no more than one grouping of guests per day.

For the most part, all events will be forbidden, Rutte said. With the exception of church services and Parliamentary hearings, maximum capacity will be limited to thirty people. Close contact sports competitions will be cancelled, as was suggested by rumors on Monday, and audiences will still be prohibited from attending amateur or professional athletic events.

"We are still seeing that it is too busy in stores," he said. "That is why we are discussing with the retail trade about a maximum number of customers per store, and creating clear agreements about hygiene," he continued. Stores that do not follow procedures will be closed.

"For companies, the cabinet is ready with support packages to absorb the blows."

Road map to make it clear what restrictions the public faces

This press conference followed two meetings of cabinet Ministers, advice from the Outbreak Management Team, and a meeting with the heads of the country's 25 security regions. Earlier on Tuesday a "road map" leaked on which the government indicated four different coronavirus risk levels, and which measures were to be taken with each one (PDF in Dutch).

De Jonge said this road map was to make the government's approach predictable so that it is clear to every member of the public what measures will be required when their region is considered an elevated risk area. "A vaccine will really not be available until the first months of 2021, and only then for the first groups. We have to bring the virus back to a manageable level," he said.

Right now, he said, the Netherlands is battling against the insidiousness of exponential growth. While the basic reproduction value of the virus has remained roughly the same for two or three weeks, there were 135 thousand contagious people in the country on Tuesday, De Jonge stated. "One out of every 120 people you meet on the street is contagious. Before the summer it was 1 in 10,000."

"We got the virus down in the spring. Now, in the autumn, we have to do the same. We know that it is not always easy, but also that we can do it," De Jonge affirmed.

That more serious social restrictions were presented was fairly expected. On Friday, Rutte said that firmer measures would be implemented if the number of new infections did not decrease by Monday. Health Minister Hugo de Jonge made similar statements when launching the government's coronavirus app on Saturday, saying that stricter measures are inevitable if infections continue to rise.

Hospitality association KHN was vehemently against the government's plans to close catering establishments in a last ditch effort to curb the spread of the virus before putting the country back in lockdown. KHN director Dirk Beljaarts called it a "fatal blow" for many companies, and complained that the KHN was not consulted in this decision.

Business organizations VNO-NCW and MKB Nederland also raised concerns, calling on the government not to "ruthlessly close or severely restrict the catering industry" but to go along with the "smart plans" the sector already made to curb the spread of the virus, NOS reports. They warned that closure will have serious consequences for the sector and the jobs it provides.