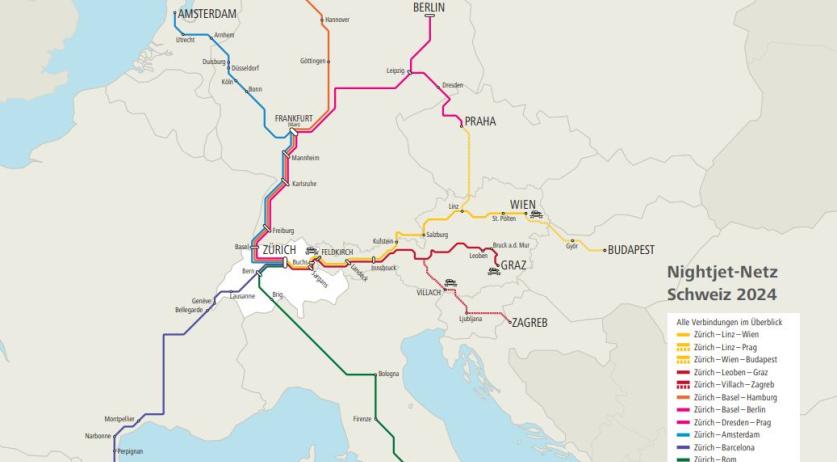 Amsterdam to Zurich night train service to launch next year

The Austrian and Swiss rail operators OBB and SBB are teaming up to create a night train service between Amsterdam and Zurich, according to plans they presented on Tuesday. The Amsterdam to Zurich night train will launch in December 2021.

In August, SBB and OBB announced that they were discussing this with Dutch rail company NS, now they signed a letter of intent to realize it. The Amsterdam-Zurich connection seems to be the first expanded service to be rolled out as part of a larger plan.

The former City Night Line service which connected Amsterdam and Zurich until 2016 made 19 stops in between the two cities. These included Utrecht and Arnhem in the Netherlands, and Cologne, Dusseldorf, and Frankfurt in Germany, and Basel, Switzerland. The full journey was just shy of 12 hours.

An initial route map published by the rail companies suggested that seven stops might be cut from the service, such as Oberhausen, Frankfurt Airport, and Baden-Baden, as well as a few outer stops in Basel. The additional stops in Utrecht and Arnhem were included on the route map.

After a period of night train connections disappearing, overnight train travel seems to be gaining popularity again. The train is often mentioned as a more sustainable alternative to short-haul flights. Airlines like TUI have started scrapping some shorter flights in order to lower their emissions. According to a Greenpeace report in November last year, nearly 40 percent of passengers traveling through Schiphol fly distances shorter than 750 kilometers.

From December this year, it will be possible to take a night train from Amsterdam to Vienna. Amsterdam, Hamburg, Copenhagen, Stockholm and Helsinki are also looking into running a night train between these cities. A night train is also expected to launch in two years that would connect Malmo and Brussels.