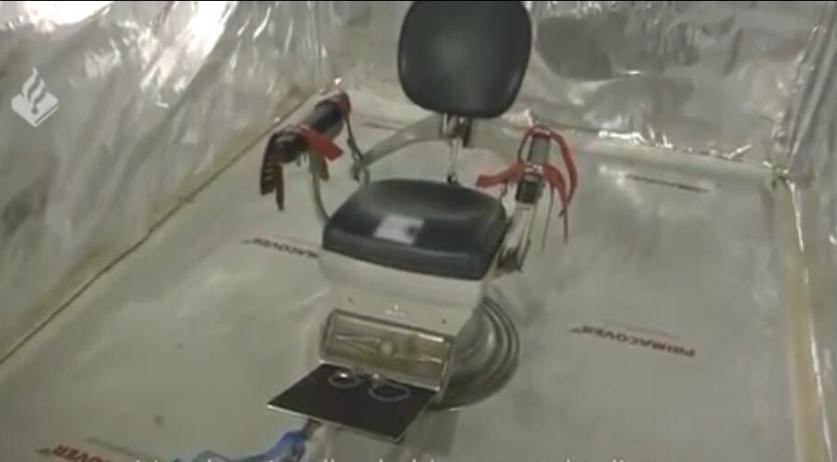 The police discovered an underworld prison and torture chamber in a warehouse in Wouwse Plantage in Noord-Brabant. Six men were arrested on June 22 on suspicion of preparing for abductions, hostage takings, and torture in the criminal underworld. In a second warehouse in Rotterdam, the police discovered a second location believed to be a base for criminals, the police said in a statement on Monday.

The discovery and arrests were made partly thanks to information from encrypted messages gained access to by hacking encrypted phone provider Encrochat. The police announced last week that this hack gave them access to millions of messages sent between criminals. The prime suspect, a 40-year-old man from The Hague suspected of involvement in drug trafficking, was linked to messages about abduction, torture and the underworld prison discovered in Noord-Brabant.

The Noord-Brabant underworld prison consisted of seven sea containers, the police said. Six of them were equipped to serve as jail cells, the seventh as a torture chamber, the police said. Intercepted messages contained photos of a container with a dental chair, with straps on the armrests and footrest. Abduction and torture were discussed in the messages. The suspects called the facility an 'ebi' - a Dutch acronym used for high security penitentiaries - with a 'treatment room'.

The police had the warehouse in Noord-Brabant under observation since mid-April and saw several men working on the sea containers almost every day. One of these men, a 44-year-old from Nieuwegein, also met with the prime suspect from The Hague and a known accomplice, a 43-yearold man from Rotterdam, the police said. The combination of the Encrochat messages and observations led to their identification.

Investigators decided to step in when the prison seemed to be nearing completion. They found that the containers were equipped with sound insulating plates and heat insulating foils. Handcuffs were attached to the ceiling and floor in each of the cells, with a camera mounted in the corner so that an eye could be kept on the cells from a distance.

In one container, the police found several sets of police clothing, bulletproof vests, and flashing lights. Another container held bags of what the police believe were meant to be torture implements - pruning shears, loppers, branch saws, scalpels, pliers, handcuffs, finger cuffs, tape, balaclavas, and black cotton bags that can be pulled over the head. They also found thee stolen vans and two fast BMWs, and a sleeping area set up in an adjacent room, believed to be for guards.

The chats also spoke of a second warehouse, located right next to the A16 in Rotterdam. There the police found seven handguns and an automatic assault rifle, a Chinese variant of the Kalashnikov AK-47. Several of the suspects were seen at both warehouses. The police also raided eleven other locations. In a home in Rotterdam, they found 24 kilograms of MDMA. A total of 25 weapons were found among the suspects.

According to the police, they could deduce from the messages who the intended targets of the abductions and torture were. These people were warned and went into hiding, the police said.

The six men were arraigned and remanded into custody. They are suspected of preparing for abductions, hostage takings, aggravated assault, extortion, and participation in a criminal organization. Two of them are also suspected of illegal weapons possession.