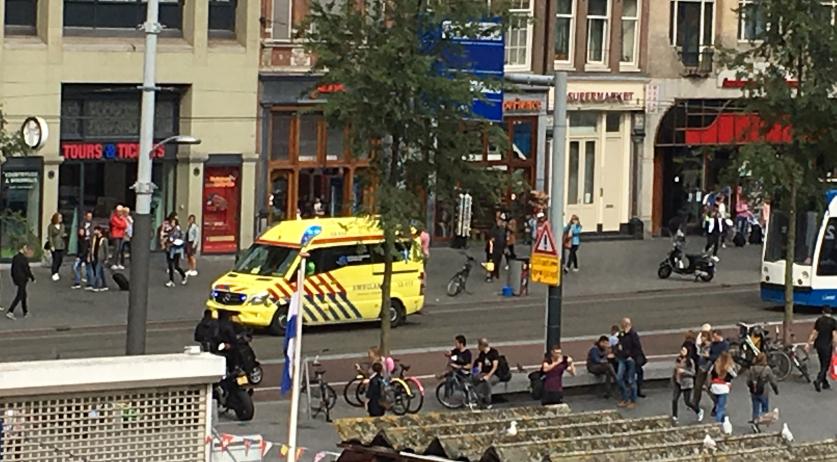 The trial against Jawed S., the man suspected of stabbing two American tourists at Amsterdam Central Station on August 31st last year, starts in the high security court in Amsterdam on Monday. The two victims will be present at the trial. The three police officers who stopped S.'s attack and arrested him will also speak in the trial, with their identities hidden for security reasons, RTL Nieuws and Nieuwsuur report.

Jawed S., 20, fled Afghanistan a few years ago and ended up in a shelter in Germany. It seems that he radicalized in the asylum center - an employee reported to the German security services that he noticed the man's appearance and behavior change. S. grew a beard and his posts on social media became increasingly radical, according to RTL. Every day he posted a video focused on the prophet Mohammed. PVV  leader Geert Wilders also made regular appearances on his Facebook timeline.

On August 31st last year, S. boarded a train to Amsterdam. His plan was to kill Wilders over a Mohammed cartoon contest the PVV leader was organizing, the Dutch authorities believe. S. arrived at Amsterdam Central Station at 11:15 a.m. For the next 45 minutes, he was seen wandering around the station. He was noticed by a police 'spotter' at the station - a police officer trained to recognize deviant behavior.

"There are a lot of small indicators that make you think: this is different than usual. This man had a bad energy. His whole attitude, his appearance, his glances. That made me feel like this person was planning something very intense", the police spotter, going by the fake name of Roel, said to Nieuwsuur. "People look at a police officer a few times every day. But this man did it in such a different, strange way that it triggered me. He lingered and looked at certain places, so I thought: we need to do something about this."

Roel made radio contact with his two colleagues at the station, going by the fake names Sam and Thijs, asking them to come to the station hall where he was keeping an eye on Jawed S. At that moment, at around 12:00 p.m., S. attacked two American tourists, who were standing with their backs to him.

"Even before we were there, panic arose at the information desk", Sam said to Nieuwsuur. "Out of the corner of my eye I saw someone running on the right side of the hall. He was holding a knife." Thijs said: "Then I saw the man stabbing around him and there was a lot of tumult and screams." He continued: "I immediately went into a kind of fighting mode. I drew my weapon and went after the suspect."

As S. posed an immediate threat to the people around him, officer Roel shot him in the lower body, hitting him in the hip. "I thought he wanted to make more victims. So at the time, he was a threat that needed to be eliminated", Roel said to the program. "I looked at his hands to see if I saw any igniters or wires. Because that was our biggest fear, that he had a bomb with him." Nine seconds after the attack started, S. was incapacitated.

While Roel and Thijs held S. at gunpoint, Sam went to the victims. One of them was in a serious condition. "The man could not move his lower body, but he was fairly calm. He asked what had happened and where the perpetrator was. His wife was in a panic." Travelers were evacuated from the train station, the victims were taken to hospital, and Jawed S. was taken into custody. Both victims survived, but one of them is now paralyzed.

A few days later, at the victims' request, the three officers went to visit them in hospital. Roel found it a difficult thing to do, he said to Nieuwsuur. "I was the first person to see the suspect and in the end two people were injured. As a result, I felt a bit of doubt: couldn't I have done this differently?" He feels guilty and told that to the victims. "I just stood there crying and then discussed the situation with those people. I was very pleased to hear that they don't blame me and that they thought we had done our best."

It was an emotional moment for all three cops, Thijs said to the program. "The victims kept repeating that they had a kind of second chance. They were actually very positive about it, while the man had a spinal cord injury. They were very grateful, also after our actions."