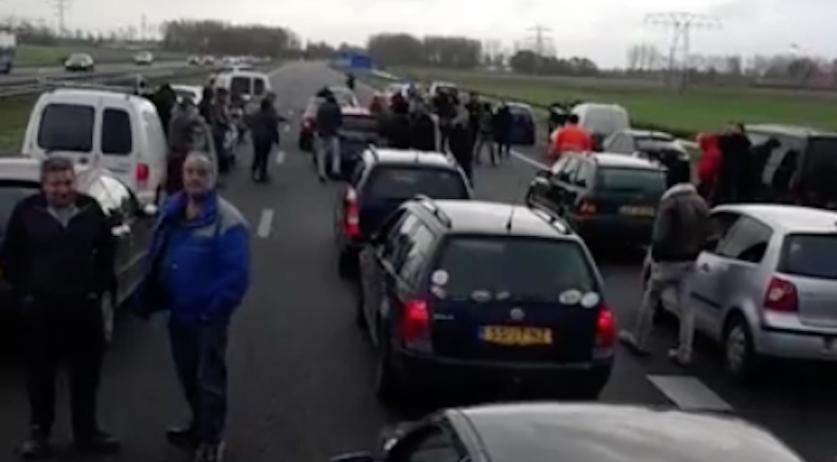 The A7 highway blocked near Heerenveen by about 35 people refusing to let groups of people pass through to protest Zwarte Piet, blackface and racism at the Sinterklaas arrival in Dokkum, Friesland. 18 Nov. 2017 - Source: photo: "Otto" / Kick Out Zwarte Piet at
Entertainment
Van Dale
Dikke Van Dale
Word of the Year
Ton den Boon
Share this:

The word "blokkeerfries" is the winner of Van Dale's Word of the Year election, getting 55.4 percent of the over 28 thousand votes. "Yogasnuiver", someone who usually lives healthily but occasionally indulges in party drugs and cocaine, and "mangomoment", a moment of happiness that a seriously ill patient experiences through an apparently insignificant, non-medical act or comment from a doctor, came in second and third place respectively.

Van Dale defines "blokkeerfries" as: each of the persons who set up a roadblock in Friesland to prevent others from demonstrating against an aspect of the Sinterklaas tradition, considered by some as a defender of it.

The term refers to a group of Friesland residents who blocked the A7 highway on 18 November 2017 to prevent two buses of anti-Zwarte Piet activists from reaching a pre-arranged demonstration at the national Sinterklaas arrival in Dokkum. The 34 suspects were recently sentenced to various lengths of community service for preventing a legal demonstration and causing a dangerous situation on the highway.

Ton den Boon, chief editor of the Dikke van Dale, is not surprised that "blokkeerfries" won this year's election. "The word has been in the news a lot lately. And I think many people have an opinion about what the word refers to", he said on Dit is de Nact on NPO Radio1. "So it was the emotion, but the familiarity of the word was also important here." The word "blokkeerfries" appeared in news articles over 700 times this past year, compared to 40 times for second place "yogasnuiver" and 90 times for "mangomoment".

Only time will tell wether "blokkeerfries" will become a permanent part of the Dutch vocabulary, Den Boon said. "I can imagine when the appeal is done, the word will disappear a bit from the news." Though he points out that the word "blokkeer" is now increasingly added to other forms of protests. "These are all words that say something about how a spirit of resistance arose among the population. That makes the word a little representative of this time."

The word of the year in Belgium is "moordstrookje", which refers to a bike path that lies close to a road and is therefore very dangerous. 'Moordstrookje', which translates to 'murder strip' in English, won with a difference of 0.2 percent over "mangomoment".