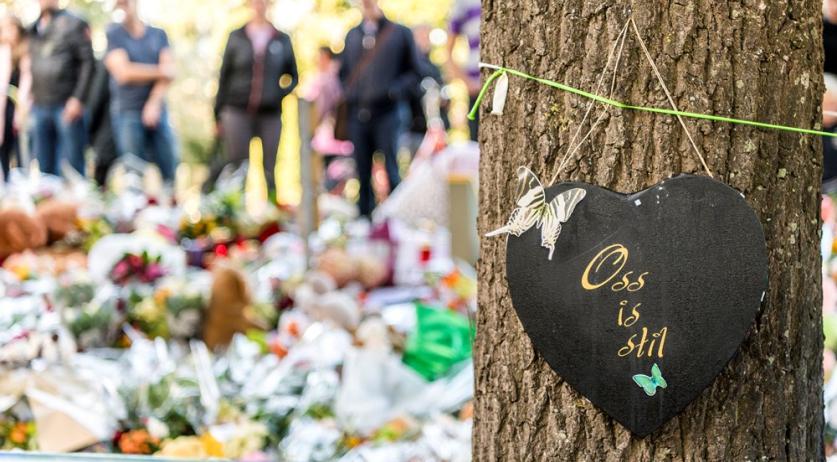 Hundreds of Oss residents gathered on Monday to commemorate the four children killed in a railway accident in the Noord-Brabant city last month. Around 550 people who were directly involved in the tragedy gathered at theater De Lievekamp for the commemoration. Over a thousand others watched on a large screen in the TOP Oss football stadium. Part of the tribune was reserved for pupils of De Korenaer, the primary school the young victims attended, NU.nl reports.

Four children, aged 4, 4, 6 and 8, were killed in the collision at a railway crossing on Braakstraat on September 20th. An 11-year-old girl and a 32-year-old woman were seriously hurt. The woman works for childcare center Okido. She was taking the kids to school on a Stint electric cargo bike when they were hit by a train. The injured girl and two of the other young victims were sisters.

The commemoration consisted of multiple speeches and live performances. The names of the victims were read at the start of the service.

Oss mayor Wobine Buijs looked back on the tragic day during her speech. "The train driver drove on the rail and then a terrible blow. The world stopped for a moment... Some firefighters have more than 30 years of experience, but they had to steel themselves when they saw that the victims are children." The mayor also said that the train driver and conductor were too emotional to attend the meeting.

Peter Jansen, director of De Korenaer, said that his primary school will never be the same again. "We have never lost a child. Now four at the same time."

Manon de Laat, location manager of Okido, spoke of a "pitch black day". The institution is grateful for all the support he said. His colleague is still in hospital. "She makes physical leaps forward, but mentally has a long way to go."

The railway accident touched the hearts of everyone in the Netherlands. A mountain of flowers was left at the railway crossing where the accident happened. And 263,955 euros was raised to pay for the funeral of the four children, and medical expenses of the injured girl and woman.

Since the accident the Human Environment and Transport Inspectorate has been investigating the Stint cargo bikes. The investigation is still ongoing, but the preliminary results revealed enough safety risks for Minister Cora van Nieuwenhuizen of Infrastructure and Environment to ban the vehicle off the public road. Stint Urban Transport, the manufacturer of the cargo bikes, is fighting that measure.

The @gemeenteoss community is paying their respects and saying goodbye to four children who were killed 20 September 2018 when a passenger train was involved in a level crossing collision at Oss, in the Southern part of the Netherlands.