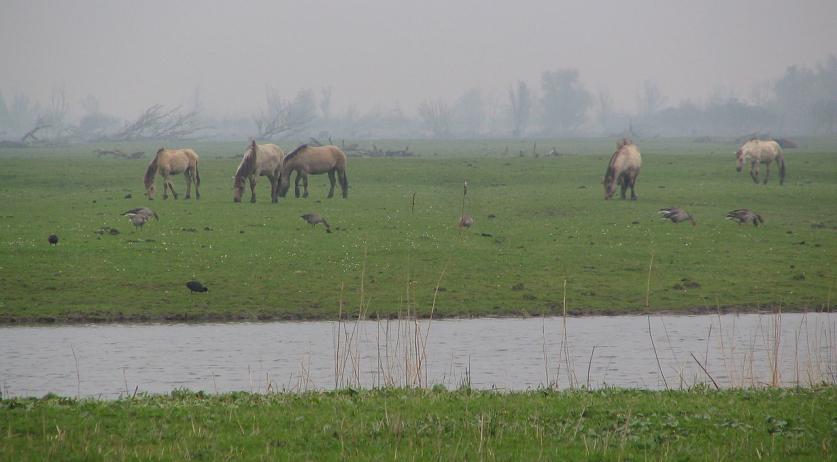 Between 200 and 300 people demonstrated at the nature reserve on Sunday, in protest against Oostvaardersplassen's feeding policy for large grazers. Over the past weeks there's been a lot of criticism about how the horses, deer, and cattle are treated in the reserve. Many animals die there in the winter because extra feeding is not allowed. Among other things, critics point out that the animals have nowhere to go to find food, because the area is fenced. But according to the foresters, letting nature take its course is in the best interest of the animal population and the area as a whole.

According to newspaper AD, the injured woman was hit in the hand by a police baton while officers were trying to keep the group of people who forced open the gate out of the nature reserve. The demonstrators were trying to bring hay into the reserve for the large grazers to eat. The five arrested persons were taken to a police station, ANP reports.

"We wanted to take peaceful action by throwing some hay over the fences. After all, it's also Easter for the animals, who also want to be pampered for once. But it went terribly wrong", demonstrator Betty den Engelsman from Alkmaar said to AD. "We came across a large police force that forced us to go back. In that a protester was beaten with a baton. His wife broke her hand. She had her hand on the fence and they just took a rubber bat to it."

The police are investigating the incident, a spokesperson for the Midden-Nederland police said to AD. "We saw on footage that a demonstrator was indeed injured by a baton of one of our officers. We are investigating the case", he said. "If the woman feels the need, she can report to us. It is also possible to file a complaint if she feels she was treated unfairly." The spokesperson added that taking part in such a protest entails some risks.

The majority of demonstrators left the area by 2:00 p.m., a police spokesperson said to ANP. But a number lingered and threw feed over the fence until around 4:30 p.m.

Feeding the animals is not allowed, especially in this way, where the feeding is not regulated by the foresters. But forestry association Staatsbosbeheer will not take any steps against this action, in order to prevent further escalation, according to the news wire. The association did stress that people should not feed the animals themselves, as it has an adverse affect on the health of the animals.

"We understand that people can look at Oostvaardersplassen in different ways. But it is not good to feed the animals. We've said that from the beginning. You are interfering with nature. The area itself determines how many animals there is place for", Staatsbosbeheer spokesperson Marcel van Dun said to AD. According to him, rest is important right now. "But [Sunday] the opposite was achieved. The animals are in winter mode, they need rest. They wait for the grass to start growing. By interfering in the area now, you disrupt that rest with all its consequences."