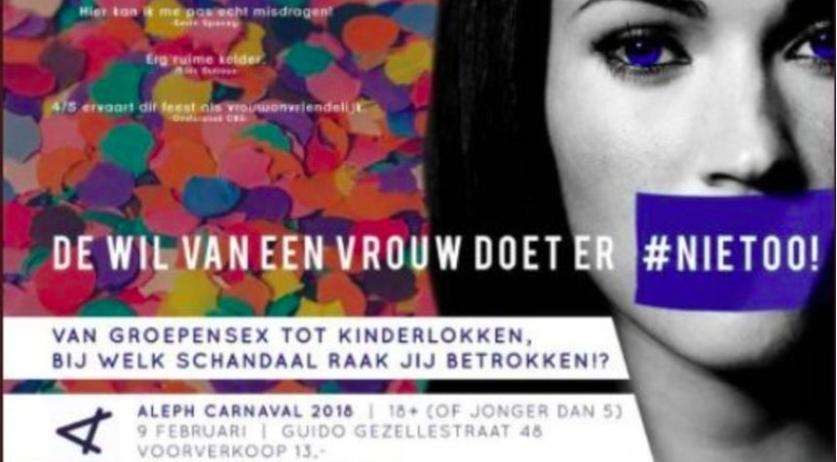 The Eindhoven University of Technology suspended its subsidy to the Eindhovens Studenten Corps due to an inappropriate carnival party arranged by the Aleph fraternity. The theme for the party, which Aleph posted on Facebook on Tuesday, was: "De wil van een vrouw doet er #nietoo" - basically what a woman wants doesn't count, with the hashtag being a reference to the #MeToo movement in which women revealed sexual harassment and assault last year.

The event has since been removed from Facebook, and has been canceled, the Eindhovens Studenten Corps said on their website. But screenshots of the event description can still be found on social media.

The description starts out speaking about sexual harassment and -assault, and how studies show that 3 out of 4 women today feel that they had been assaulted. "We, of the aleph fraternity, think this is of course wonderful. That we have been allowed since 1958 to grope women unasked, is a luxury other men can not enjoy", the event read. "Until recently, we always got away with it. However, the weaker sex started a counter-movement under the name #metoo. In this way several woman ask attention for their unwanted intimacies. In order to maintain our traditions, we must, of course, put a stop to this. And what better time for this than Aleph carnival. Because we at Aleph know, like the rest, that women do not have a say over their own body during carnival."

Aleph "crossed the line completely" with this party theme, the Eindhoven student association said on their site. "Such a theme has nothing to do with the standards and values that the Eindhovens Studenten Corps stands for. We regret the tone and content of the Facebook event that has since been removed and we apologize." The association said they understand why TU Eindhoven decided to suspend their subsidy temporarily. The association is looking into how such statements and texts can be banished for good.

A spokesperson for the university told NOS that the fraternity went badly wrong. "Especially now that associations are being looked at with a magnifying glass, you simply can not make this type of statements", the spokesperson said. "Usually it is a nice corps, but this is so wrong."

Student associations in the Netherlands have been under intense scrutiny since 2016 following a number of incidents, most related to hazing. In December the HU University of Applied Sciences Utrecht and Utrecht University suspended their contributions to female student association UVSV after television program Rambam revealed a number of incidents during hazing, including aspiring members being spat on and one student's asthma medication being kept away from her.

A Groningen student, member of the Vindicat student association, was sentenced to community service for giving an aspiring member a brain injury by standing on his head during hazing. During the investigation into this incident, it was revealed that aspiring Vindicat members are made to sign a contract promising they won't reveal what happens during hazing.

In March last year a female Vindicat member went viral when she posted a video online about her experience with "slut shaming" at the association. Vindicat also made negative headlines when it was revealed that its members made a "bang list" of about 20 female Groningen students, rating them on their looks and whether they are worth a "bang". Vindicat eventually suspended 13 members believed to be responsible for the list.

In 2016 three Amsterdam students were hospitalized during hazing, and last year students reported being assaulted in the hazing rituals. In September 2016 the hazing rituals at Utrecht student association Veritas were likened to Guantanamo bay torture.