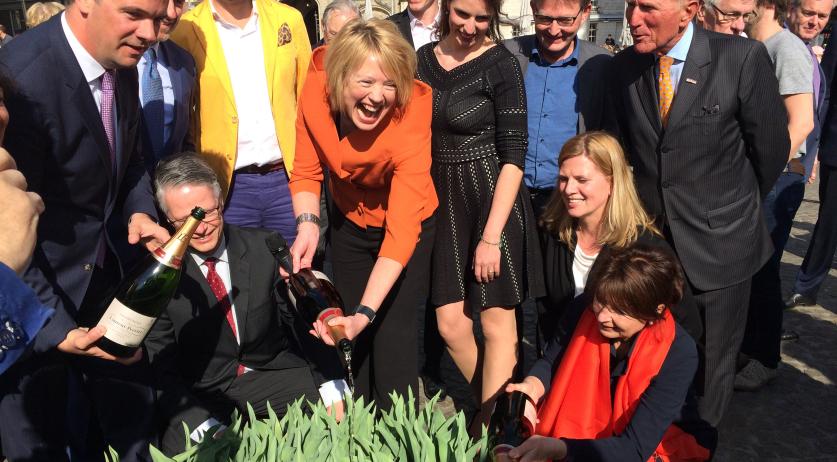 The third edition of the Amsterdam Tulp Festival was officially opened on Thursday. For this edition of the festival, which will run from April 1st to May 14th, a massive 500 thousand tulip bulbs were planted across the city. During the opening, the new Paleiskwartier association was introduced, with the group made up of organizations along the major Amsterdam streets of Damrak, Rokin, Kalverstraat and Nieuewndijk as well as Dam Square.

The Tulp Festival was established to bring more tulips to even the most urban areas of Amsterdam, festival organizer Saskia Albrecht told the NL Times after the opening ceremony in front of the royal palace on Dam Square. "The goal is to display tulips everywhere in Amsterdam, also where there are not many tourists," she said. The point, she added, is to connect everyone in the city to a flower that is synonymous with the Netherlands.

This year the organizers planted tulip bulbs at over 60 locations in the city. Bulbs were planted in the ground, in pots, in gardens, next to special buildings and in public spaces. Most of the plant work was done by volunteers and school children during the autumn. The Tulp Festival created an online map so that people can see exactly where to find the Dutch flowers.

The Westermarkt is decked with only white tulips. And in the garden of the Museum van Loon there are only palatial tulips. Parks like Oosterpark and Frankendael have tulips of all colors. Tulips can also be found at, among others, at the Eye, RAI convention center and in the gardens of the Rijksmuseum, Van Gogh Museum and the Hermitage Museum.

"What's very different this year is that we have tulips along the whole of the Damrak and Rokin," Albrecht said. That means anyone walking through the city between Amsterdam's Central Station and Muntplein can admire thousands of tulips on this walk through and around the Paleiskwartier, or "Palace District" in English.

During the opening of the Tulp Festival, entrepreneurs and organization directors based in the Paleiskwartier announced that they have teamed up to protect the beauty of the oldest parts of the city and to bring the beautiful Paleiskwartier back to the attention of Amsterdam residents. "Many Amsterdammers associate the oldest kilometers of the city manly with shopping, while it has so much more to offer. In the small area a complete range of history, culture and hospitality can be found within walking distance," said Richard Francke, chairman of the group Paleiskwartier.

Franke, is also the director of the De Koninklijke Industrieele Groote Club Amsterdam, a prominent business and social club that can trace its roots back to the late 18th century. "If we have to deal with social issues, it is better to present ourselves as one united voice," Franke said of the association's purpose.

"This started with a cooperation of five streets at the heart of the city center," he told the NL Times. "We needed something really special to introduce the Paleiskwartier," prompting them to connect with the Tulp Festival.

In honor of the collaboration, a new tulip with a blue heart and red petals was bred just for the Paleiskwartier. The blue represents the royal palace at the center with the connected red petals all around, signifying the special district within the city center.

The festival runs until May 14th, or as long as the tulips are in bloom.