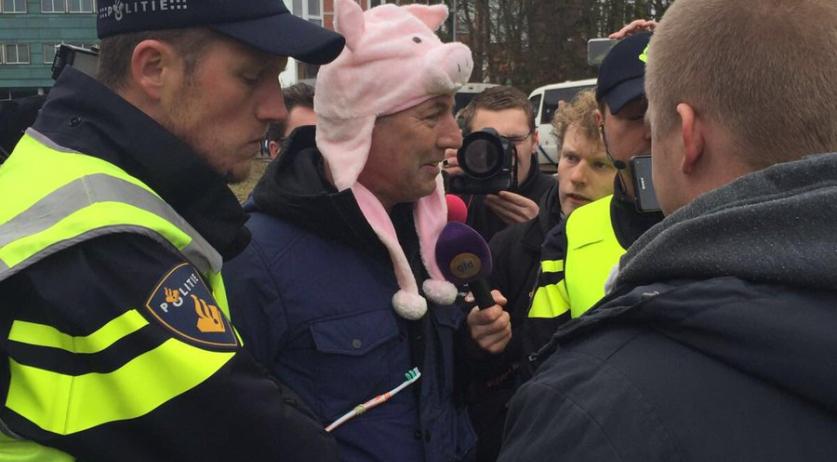 Two people were arrested during an anti-asylum center protest organized by anti-Islam movement Pegida in Ede on Saturday. One of those arrested was Pegida frontman Edwin Wagensveld. He was wearing a hat in the form of a pig's head at the time, broadcaster NOS reports. According to the police, Wagensveld was arrested because of provocative behavior. He put on the hat after the police ordered another protester to take it off. Wagensveld was released about an hour after his arrest. The other detainee is still in custody. The protest was organized by Pegida and DTG, known as Protesters Against Municipalities in English. About 100 people were present. Other than the two arrests, the protest was uneventful. The protest was against the Ede municipality's plans for accommodating between 600 and 1,400 asylum seekers in different locations. A counter-demonstration was also announced, but no one showed up for it. A group of Ede residents did hang a banner on the bridge at Stadspoort shopping center on Friday which read: "Asylum seekers Welcome". "We are not out to create distress, but with this banner we want to make a counter-sound heard." Margriet Goris said to Ede Stad.nl. Pegida plans another demonstration in Amsterdam on Saturday, February 27th. Mayor Eberhard van der Laan will allow it, according to local broadcaster AT5. According to the Mayor, Pegida is "welcome" just like anyone who wants to demonstrate in the city. The location of the station is still being discussed. The anti-Islam movement wants to again protest in front of Mayor Van der Laan's official residence, from where their protest had to be moved two weeks ago. Van der Laan does not personally have a problem with this. "The official residence is a special case. If someone wants to demonstrate in front of one of my aldermen's private house, he can be sure that I will not allow it. This is the official residence, I do live there, but it is also a symbol. I myself have no fundamental objections against it." he said to the broadcaster.