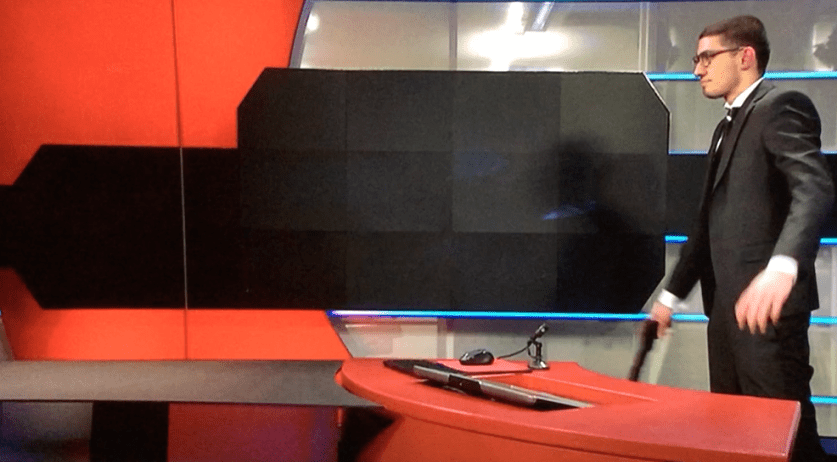 "Delusional," not crazy: TV hostage taker may get four-year sentence

The Public Prosecutor demanded a 4 year prison sentence against Tarkk Z. - the 20 year old responsible for the hostage situation at the NOS Journaal earlier this year - in the court in Lelystad on Friday. According two the two psychiatrists who examined Z., he does not need psychological treatment - he suffers from "delusional ideas", but does not have an actual disorder. The Public Prosecutor called this conclusion "alarming", but the psychiatrists do no share this concern. According to them, Z. is able to get help if he feels that he needs it. The Public Prosecutor therefore considers Z. fully accountable for his actions. The prosecutor demanded a prison sentence of 4 years, one of which suspended, and contact with a rehabilitation service, according to reporter Raymond Boere who is live tweeting from within the courtroom. The prosecutor also demanded that Z. not be allowed near the NOS studios and 23 thousand euros in compensation for NOS and the security guards who had to deal with him. Z. is present at the trial and had a chance to speak. He said that he wanted to warn Dutch citizens about "hard facts" he received from hacker circles. According to him, NOS rents out internet connections and manages critical data nodes. "So they can eavesdrop on and manipulate all data traffic." Z. believes that it often happens that images of other broadcasters are cut and that incorrect subtitles are used. Z. insisted that he did not take anyone hostage, however, he can imagine that he seemed threatening. He was carrying a gas pistol with him. "I did not physically hold anyone hostage, I think, so I do not see it as a hostage situation", he said. He told the security guards that his action is "certainly no joke" and that "things would happen" if he did not get his way. But "hostage taking is more serious", he told the court. He wanted his action to seem like a hostage situation, so that if someone called in the emergency services, they would take longer to come in and shoot him, he said. "I can imagine that they thought it wise to work with me", he said to the court.