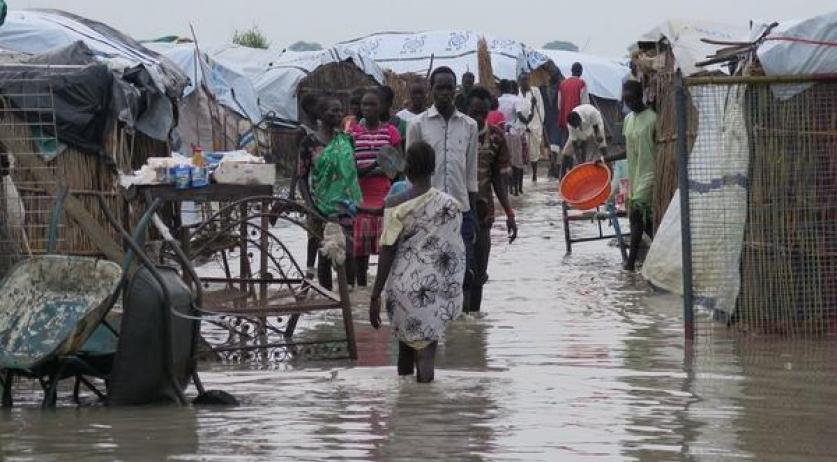 Dutch to help refugees in South Sudan stuck in swamp

A group of water engineers, led by Dutch engineering firm Grontmij, has come up with a plan to prevent the refugee camp in the South Sudanese town Bentiu turning into a swamp during the raining seasons. The project is estimated to cost 20 million euros, of which the Netherlands will contribute 5.4 million. Other financiers include the United Nations, the European Union and Switzerland. Thousands of refugees have flooded to the UN compound near Bentiu since the outbreak of the civil war in Southern Sudan in December 2013. This compound is located in a lower area and changes into an immense quagmire in the rainy seasons, covering the refugees' already scarce facilities and tents in mud. This involves a total of more than 50 thousand people living in a 70 hectare swamp area. "Despite all the efforts of aid workers and UN staff and the people themselves to make the best of it, the camp looked terrible. Hence the decision to send a water expert to Bentiu to make an assessment of what was needed for the short and long term", said Minister Lilianne Ploumen of Foreign Trade and Development Cooperation. This approach has resulted in a design for the renovation of the old camp and the addition of a new section of the camp. A ring dike will be constructed, ditches and canals will be dug and a large pumps will be installed to ensure good drainage. It is now the dry season and contractors are working very hard to have everything ready before the rainy season in May and June, the Rijksoverheid reports. The Dutch contribution is specifically focused on creating the technical design and supervising the implementation. The bulk of the financial contribution will be used for the construction of ditches, canals and drainage pumps. "What we are doing in Bentiu is a good example of the added value of Dutch knowledge and skills." Ploumen said. "Firstly it is of course important for the refugees themselves, so that they get a better place. And at the same time it shows how our companies and knowledge institutes can also play an important role in emergency relief."