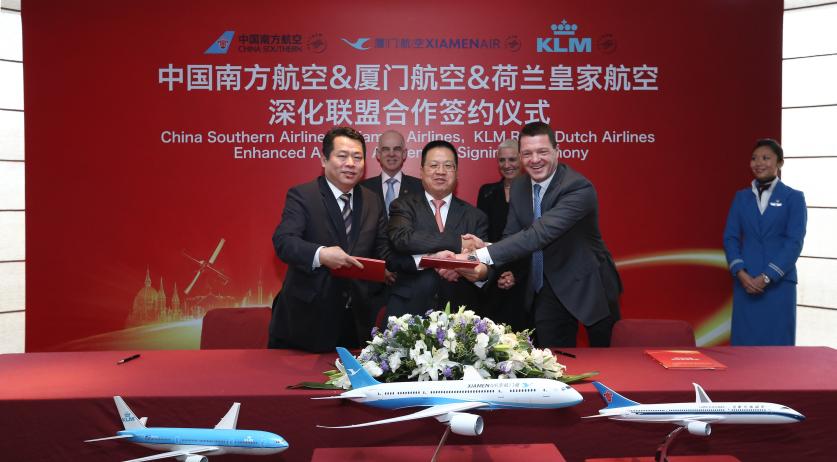 KLM Royal Dutch Airlines signed an agreement on Thursday to expand its joint venture with China Southern Airlines through a partnership with Xiamen Airlines, KLM stated in a press release. Beginning July 26, Xiamen Airlines, a fellow SkyTeam alliance member, will fly three weekly roundtrips between Amsterdam and Xiamen. That brings the partnership's total number of weekly non-stop services between Amsterdam and Greater China destinations to 60. Together, KLM and China Southern Airlines currenrly offer eight non-stop services between Amsterdam and Greater China destinations, with 57 weekly frequencies. The two companies, partners since 1996, have made Amsterdam "an important gateway to China from Europe and for Chinese passengers visiting Europe and the rest of the world," said the press release. KLM signed the partnership agreement in the presence of Dutch Infrastructure Minister Wilma Mansveld at a ceremony in Shanghai during the trade mission led by Dutch Prime Minister Mark Rutte. “Due to the increase in the number of flights between Amsterdam and Xiamen, KLM and Xiamen Airlines will expand their codeshare partnership in China and Europe to 15 destinations,” said the statement.