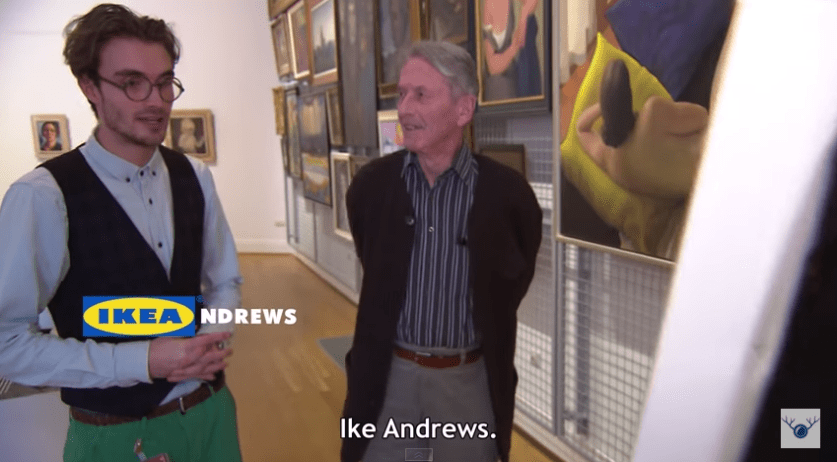 With reporting by Zack Newmark Known for their viral videos, Boris Lange and LifeHunters.tv presented a ten euro IKEA painting as a masterpiece inside Museum Arnhem for their latest piece. Dressed up as an art connoisseur cliché,  Lange walks around the museum asking visitors for their opinions about the artwork, which he says is painted by up-and-coming Swedish artist Ike Andrews. Scroll down to watch the video Museum patrons take the painting very seriously, and do not hesitate to pontificate, and share their expertise with the fake art expert. Lange asks elaborate questions, and strings along the prank victims with his own opinions in a professional manner. "It's a depiction of the chaos in his mind," one of the visitors says, while another sees "primordial shapes" with African houses. Praise is not spared when the masterpiece is presented for the first time, with one man saying, "Dear me, it's unbelievable," at first glance. The painting itself is a part of Ikea's new street art collection. The gag was originated by the creative team at LifeHunters, who then approached both Ikea and the museum with the idea, LifeHunters' Erik Hensel tells NL Times. In the end, it really was a cooperative effort between the three to make the video happen, Hensel points out. "We always think of ideas a week before we shoot," he adds. "We thought about this one six weeks before." LifeHunters used the time to embed a small hidden camera on the painting to capture authentic reactions from the amateur art connoisseurs, and to develop a script for Lange to advance the interactions with museum visitors. "Nothing was staged. Everything was real. They are real reactions," Lange tells RTL Nieuws. At the end of the video, the prank is revealed with most -not all- of the hidden camera victims bursting into confused laughter. The video has already been seen by over 10 million people. When asked if Museum Arnhem was enthusiastic about the project, Hensel jokes, "When it went viral they were!" Though spreading quickly, the Museum Arnhem video still has a ways to go before it matches the popularity of LifeHunter's big video last year, Hensel says. In that video, seen an estimated 23 million times, the team ambushed an upscale food convention to present their culinary specialties, sliced chunks of McDonald's meals.