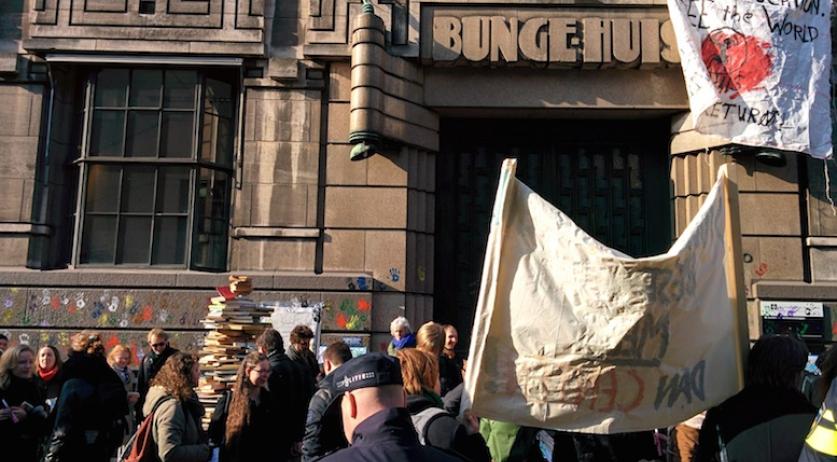 Univ. Amsterdam staff shut out for days as protest continues

Humanities staff at the University of Amsterdam (UvA) may be unable to return to their offices on Monday after students and at least one university lecturer began an occupation of the Bungehuis building in Amsterdam Centrum on Friday. Resuming business as usual on Monday at their offices at Spuistraat 210 seems unlikely, according to an email obtained by the NL Times, sent by the Faculty of Humanity’s operations director late Friday afternoon. “There have been a number of discussions with the occupiers, but this has not led to them exiting the building, and we cannot resume our work. The aim is to find as many ways as possible to ensure that our teaching and research continues. But it is unclear if we will be able to get into the Bungehuis by Monday,” the message says. The email advises staff to find alternative workplaces or work from home. Classes scheduled for Monday are likely to be moved to another building. Lecturers will be informed of this at a later time, and they are asked to subsequently inform their students of any changes, says the operations director. Friday’s lock-in was staged by the nation-wide organization Nieuwe Universiteit. In an email to NL Times, Frank van Vree, the dean of the Faculty of Humanities, described the organization as “a radical group of students and staff of UvA, Free University [Vrije Universiteit] and other universities, who want to change what they see as the neo-liberal university.” The occupation forced all activities scheduled to take place in the building on Friday to be cancelled or moved elsewhere. “When I got there it was just a complete mess,” said a lecturer in modern languages, who arrived around 9 a.m. at the Bungehuis. Occupiers could be seen leaning out of windows, dangling banners and throwing confetti onto the masses gathered outside. The lecturer, who requested anonymity because his temporary work contract makes his position at the university vulnerable, ended up teaching his class at a nearby university building, at Spuistraat 134, but found it challenging. “I left all my teaching materials locked in the Bungehuis so when I went down to PC Hooft[huis] this morning I used what I had online,” he said. A close colleague, who requested anonymity for the same reason, said she did not have to teach on Friday, but had been planning to work in her office to prepare for next week. Faced with the news of Monday’s possible closing, she told NL Times, “This is really a problem as I cannot print my handouts for Monday or retrieve the books I need to plan my classes.”