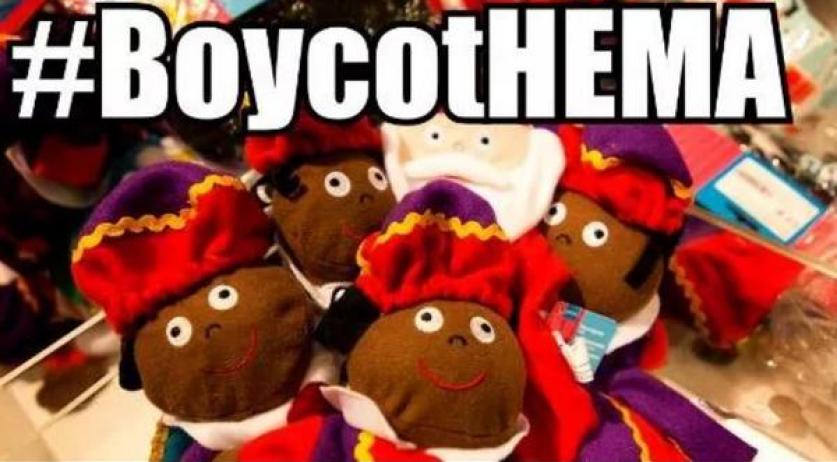 Dutch chain store HEMA is coming under scrutiny for not being clear about whether or not their shelves will be filled, as per tradition, with Zwarte Piet items before Sinterklaas in December. On Twitter, #BoycotHEMA is a trending topic as many customers are angered that HEMA is "surrendering" under the Zwarte Piet discussion. According to an e-mail exchange between HEMA's direction and a client, which has reportedly been obtained by new action committee named 'Malle Piet' (Silly Piet), the shop has stated that the Sinterklaas caricature will no longer appear on products. In a statement, HEMA does not want to comment on the specific email, but does say that no changes have been made for this year's stock. "All purchases have been made for 5 December, and we cannot yet make statements about next year", HEMA states on the website. According to Elsevier, HEMA does say that no matter what, "we have decided to hold on the Sint and Piet for this year. There have, however, been some adjustments to the packaging." These rumored plans from HEMA have caused a storm on social media. PVV-leader Geert Wilders tweets that he will no longer be going to HEMA, linking to a Telegraaf article reporting on HEMA's decision to do away with Piet. For other tweeters, the tag #boycotHEMA is trending in The Netherlands. People seem disappointed that HEMA is "surrendering" before the "ridiculous" Zwarte Piet discussion, as tweeter @TjerkLangman writes. Other shops such as Albert Heijn and toy shop Bart Smit say that they do not want to get involved with the political discussion, De Telegraaf writes. According to the NOS, there are no big shops yet who have said that they will not sell any Zwarte Piet items.

"What nonsense! Everyone knows that Piet is brown because of the chimney? #boycothema" https://twitter.com/chsters/status/504235827300671489 "Is it that time already?" Image of popular childrens' book characters Jip and Janneke 'We'll have to leave then as well'.