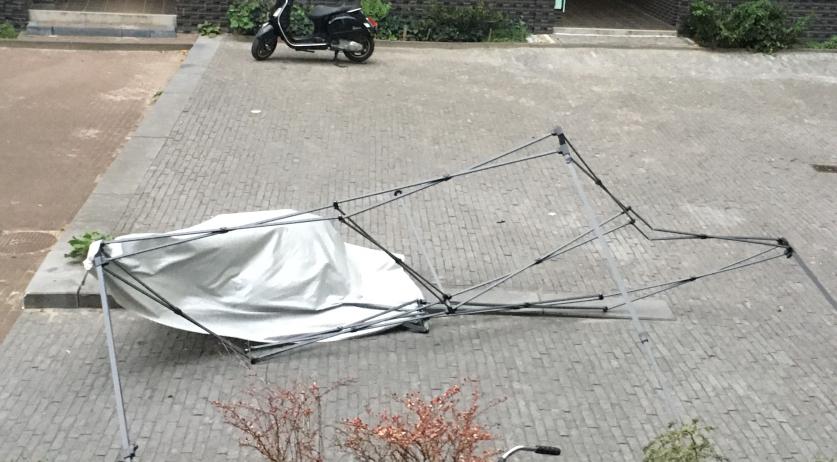 The security region in Utrecht received dozens of reports  of storm damage, varying from flooding to trees that fell onto houses, RTV Utrecht reports. A tree fell on a home in Leusden. In Beek in Limburg, a cloudburst flooded multiple streets, according to NOS. In Breda a tree fell on a car, the couple and young child in the car were not hurt, according to Omroep Brabant. Lightning struck houses in Helmond and Hengelo.

In Haarlem, a tunnel under a railway viaduct flooded. And the viaducts and Beverwijk and IJmuiden had to close due to the weather, according to NH Nieuws. Streets were flooded in Haarlem, Heemstede, IJmuiden, Beverwijk, and Hoorn.

The weather also resulted in takeoffs and landings being halted at Schiphol twice in a short time, NH Nieuws reported. Multiple planes had to fly circles over Flevoland and Zuid-Holland until it was safe for them to land. A KLM flight from Rome to Schiphol was diverted to Groningen Airport Eelde, after multiple failed attempts to land at the Amsterdam airport.

Monday will be partly cloudy in the Netherlands,with maximums ranging from 23 degrees on the coast to 27 degrees in the east and southeast, according to KNMI. There is a chance of thunderstorms during the afternoon, which may be accompanied by hail and gusts of wind reaching up to 60 kilometers per hour.