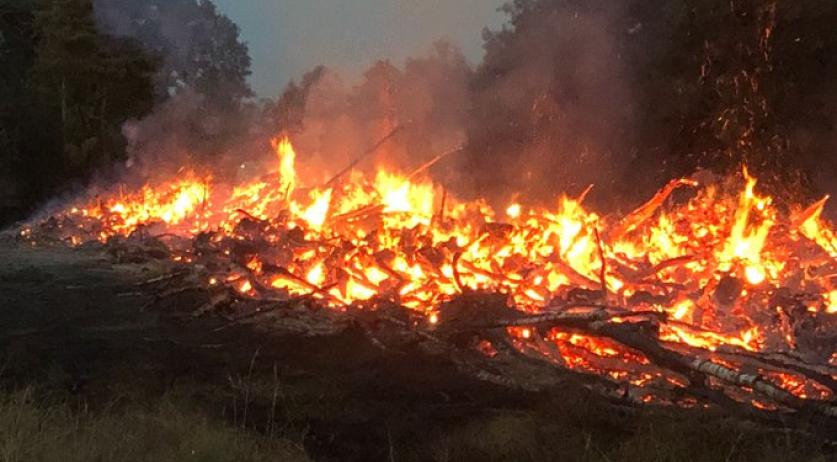 The residents of the Limburg town of Herkenbosch were all evacuated on Tuesday night due to a massive wildfire in National Park de Meinweg. Local safety region Veiligheidsregio Limburg-Noord called the evacuation a precaution to prevent risks to public health. The smoke released by the fire contains high concentrations of carbon monoxide. The around 4,200 evacuated residents will not be able to return home until this afternoon at the earliest, the safety region said to 1Limburg.

According to the safety region, the town itself is not in danger of the fire, only the breathing residents. At 10:30 p.m., two healthcare institutions were evacuated. The decision to also evacuate the rest of the town was made at around 11:45 p.m. The evacuation happened in phases, starting with the highest risk areas. It took all night. By 6:03 a.m. on Wednesday, the safety region announced that all residents had been evacuated.

Residents were asked to find their own accommodation with friends or family. Those who could not were offered beds in 16 gyms in the area.

"You can imagine that this decision was not made without deliberation. Especially in the time in which we now live - the Corona era - we do not think lightly about moving people from their home environment to reception locations," Mayor Monique de Boer-Beerta of the municipality of Roerlanden, which covers Herkenbosch, said in a statement. "However, I have been well advised by all experts and decided, considering the high concentration of carbon monoxide, to proceed with the evacuation."

The mayor stressed that the RIVM guidelines around the coronavirus would be adhered to during the evacuation. A maximum of 50 people are accommodated per location.

Deputy mayor Jan Smits told L1 that the evacuation went smoothly. "The people I've spoken to are all understanding and understand why we have to do this. Some even see it as an outing because they've never experienced this before," he said.

Firefighters are still busy fighting the fire. Herkenbosch has been cordoned off with gates. Shops and businesses are closed, the safety office said on Twitter. "We ask employees of these businesses to not come to Herkenbosch." The industrial terrain in the town is currently still open as usual.

"We expect that we will know more about the development of the fire and when residents can return to their homes during the course of Wednesday afternoon," Veiligheidsregio Limburg-Noord said