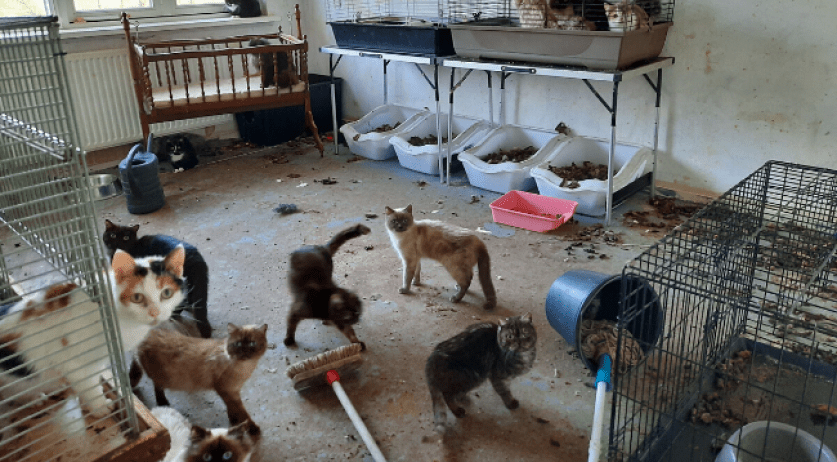 The police and national animal protection inspectorate LID rescued 49 cats and five skunks from a home in Nieuwkoop last week. The animals were poorly cared for and lived in very dirty surroundings, LID said in a statement, calling it "a serious form of animal neglect".

LID went to the home after a report of a sick dog, but the animal had already died when the inspectorate arrived. When the inspectors examined the home, they found cats living in filthy rooms. A number of cats were locked up in rabbit cages full of feces, sometimes multiple cats per cage. They had hardly any food or water. And some of them were visibly sick and malnourished.

"The ammonia smell in the rooms was so bad that a person could not stay there for longer than a few minutes," LID said. "This must also have been terrible for the animals, they have probably been in this situation for months.

In one of the rooms, the inspectors found five skunks. "They were in a bare room with only a few overflowing litter boxes. No food or drink and no distractions or possibility for natural behavior such as digging."

An inspector told Omroep West that the skunks' glands had been removed - something that is illegal in the Netherlands. "I have seen few cases as bad as this one," the inspector said to the broadcaster.

All the animals were removed from the home and are now receiving the care they need, LID said. An official report was filed against the resident. According to LID, she was already known to the inspectorate and the police, who also confiscated neglected animals from her years ago.

Images on the below video may be upsetting