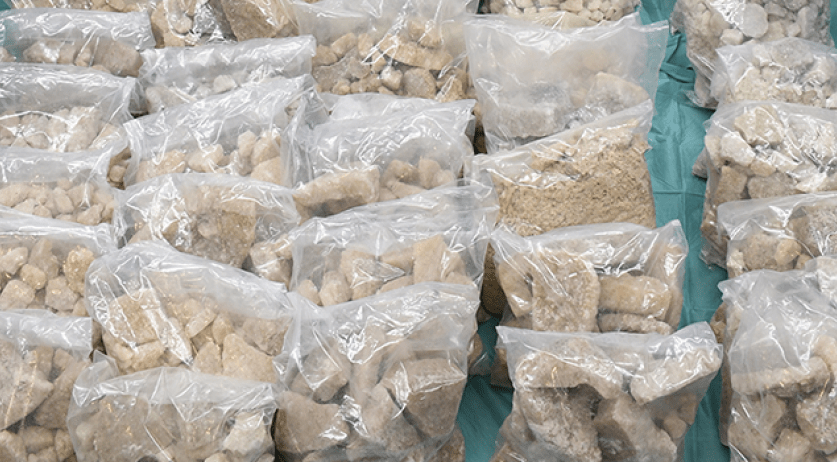 Early this month the Dutch and Australian police dismantled a large drug network responsible for trafficking MDMA from the Netherlands to Australia. A total of 850 kilograms of MDMA powder and 550 liters of MDMA oil were seized - enough to make more than 15 million ecstasy pills, according to the Australian Federal Police. The Dutch police arrested eight suspects. One suspect was arrested in Australia.

The Dutch police started collaborating with their Australian counterparts in January of this year, after receiving information that Dutch criminals had a large production line for synthetic drugs which ran from the Netherlands to Australia. Large quantities of synthetic drugs were shipped to Australia, where it sold at a substantial profit - an ecstasy pill costs around 10 cents to produce in the Netherlands and can sell for nearly 20 euros in Australia, according to broadcaster NOS.

Investigation showed that the Dutch criminals were in an advanced stage of smuggling a batch of 700 kilograms of MDMA to Australia, the Dutch police said in a statement. This shipment of drugs was seized in Rotterdam in August.

The police observed the criminal network and noticed that they used a number of buildings in the Netherlands and Belgium for storing chemicals, manufacturing drugs, or storing drugs. On November 5th, some 120 police officers raided 15 buildings at the same time. Raids happened in Raamsdonksveer, Bergen op Zoom, Hoogeloon and Opglabeek in Belgium, among others.

Five suspects were arrested on November 5th, and three others two days later. All eight these suspects are Dutch men. Among them are criminal leaders 58-year-old Paulus B. and his son 37-year-old Petronella B. A woman was arrested in Sydney. There she could face life in prison for attempts to possess a commercial quality of border controlled drugs, the Australian police said.

During the raids the police seized over 43 thousand liters of chemicals, 150 kilograms of MDMA, 1 kilogram of methamphetamine, 3 kilograms of cocaine, and 2 firearms.

"This criminal network was responsible for the annual production of tens of thousands of kilos of drugs with a turnover of hundreds of millions of euros", Andy Kraag, head of national investigation in the Netherlands, said to NOS from Australia.

This operation, called Operation Parazonium, was the start of a new police approach to combat drug trafficking from the Netherlands to Australia. The two police forces will collaborate more intensively in the future to disrupt one of the most important markets for synthetic drugs from the Netherlands. The countries will actively share more information with each other to get a more complete picture of the trafficking networks.

"We are now going to share information with each other in advance, for example about key figures, possible smuggling routes, henchmen and money flows", Kraag said. "Until now we only saw what happened in the Netherlands and vice versa in Australia. That is too limited. Now we are bringing the information together so that we see the whole picture."

"These criminals are inventive and also work beyond national borders. They have networks all over the world, which means that we have to cooperate with countries such as Australia." Kraag said.