All 11 members of radical nationalist group Pegida arrested during the national Sinterklaas arrival party in Apeldoorn on Saturday, have been released from custody, the police announced on Sunday. The Pegida demonstrators, dressed as blackface Zwarte Piet, were arrested for refusing to follow police orders. The other Sinterklaas arrival parties throughout the Netherlands happened largely without major incident.

According to the police, the demonstrators refused to go to the assigned demonstration areas. One of those arrested was Pegida leader Edwin Wagensveld.

In addition to the 11 demonstrators, the police also arrested a 41-year-old woman from Rheden because she had a weapon on her. The police did not say whether she was still in custody on Sunday.

On the day before the Sinterklaas arrival party in Apeldoorn, three men were arrested over statements they made on social media. They were banned from being in Apeldoorn during the celebration. The Public Prosecutor will decide whether they will face criminal prosecution.

The national arrival party happened without major incident. Sinterklaas arrived safely at Apeldoorn station, where he was received by mayor Petra van Wingerden-Boers before he traveled through the city by coach. Over 25 thousand people attended the party, and 1.7 million watched the television broadcast, according to NU.nl.

During the party, the police randomly searched jackets and bags of attendees. The bags of people dressed as ‘traditional’ blackface Zwarte Piet were also searched. These Pieten were not part  of the official arrival party, which only included so-called Chimney Pieten with soot marks on their faces instead of blackface makeup.

The other Sinterklaas arrival parties in the Netherlands also largely happened without major incidents. Amsterdam, Haarlem, Utrecht and Den Bosch had their parties on Sunday instead of Saturday.

After the arrival party, there was an incident during a football match between FC Den Bosch and Excelsior in which Den Bosch supporters made jungle noises and sang Zwarte Piet songs at Excelsior player Ahmad Mendes Moreira. 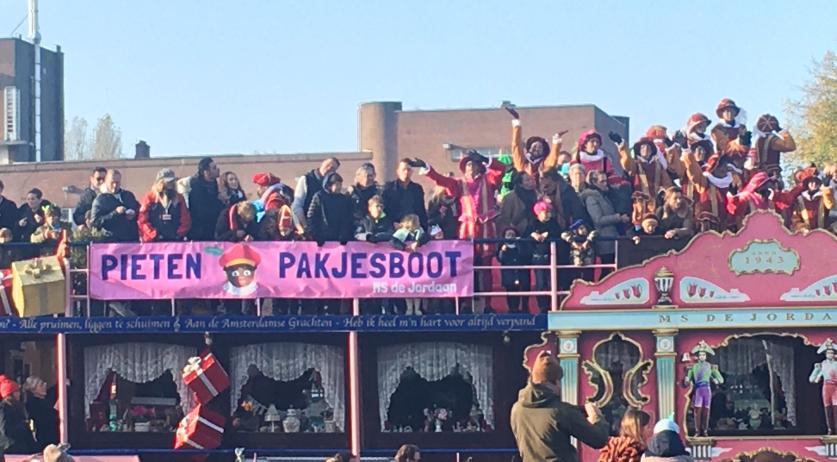 Some relics of the blackface look of Zwarte Piet still appear in the official Amsterdam Sinterklaas parade, even though actors portraying the character have been told not to use blackface makeup for years. 17 Nov 2019 Photo: NL Times NL Times