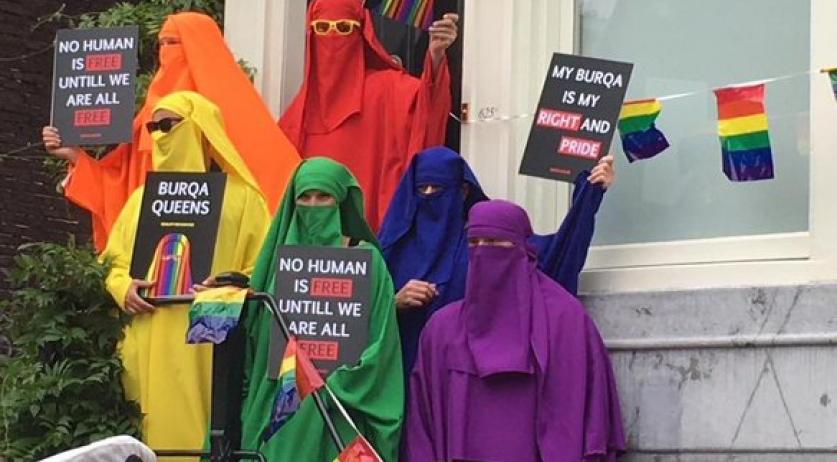 The PvdA faction in Amsterdam received a storm of negative reactions because of a photo posted on the party's Twitter account on Saturday. In the photo, PvdA councilor in Amsterdam Hendrik Jan Biemond is posing in a yellow burka with other burka wearing people from the LGBTQ community during Canal Pride in Amsterdam on Saturday, AD reports.

The rainbow colored burkas were meant as a protest against the Partial Ban On Face Covering Clothing Act, which was implemented on August 1st. Often referred to as the 'burka ban', the law bans the wear of face covering clothing in government buildings, education institutions, healthcare institutions and on public transport. While the ban covers all face-covering clothing - including burkas, niqabs, balaclavas, masks and motorcycle helmets - opponents see it as an anti-Muslim measure.

The protesters in the photo hold signs reading "Burqa Queens", "No human is free until we are all free", and "My burqa is my right and pride". In a written response, Biemond said that he is not specifically in favor of the burka. "But I am more against the burka ban. I want people to have the freedom to do what they want. Or is that too difficult?" The Amsterdam faction of the PvdA said on Twitter: "For the PvdA Amsterdam, freedom means that you can be who you are and therefore also wear what you want."

The protest action prompted criticism from hundreds of people on social media. Politicians were also critical. Former VVD parliamentarian Daniel van der Ree called the action "bizarre" and expects that it will further deteriorate the labor party's support. "On to 0 seats in this way", he said on Twitter. D66 councilor in Amsterdam Jan-Bert Vroege pointed out that the PvdA helped to introduce the burka ban in the Netherlands, according to AD.

Not everyone in the PvdA was happy with the action either, according to the newspaper. "Everyone must do what they want. But I don't think it's wise to provoke like that", Jaap Stalenburg, PvdA member of the Provincial States in Friesland, said to the newspaper. He stressed that this is not an official statement from the national party. Former PvdA parliamentarian Keklic Yucel is also critical. "My PvdA is always fighting for women's freedom and equality, and not for women's lack of freedom and inequality", she said.