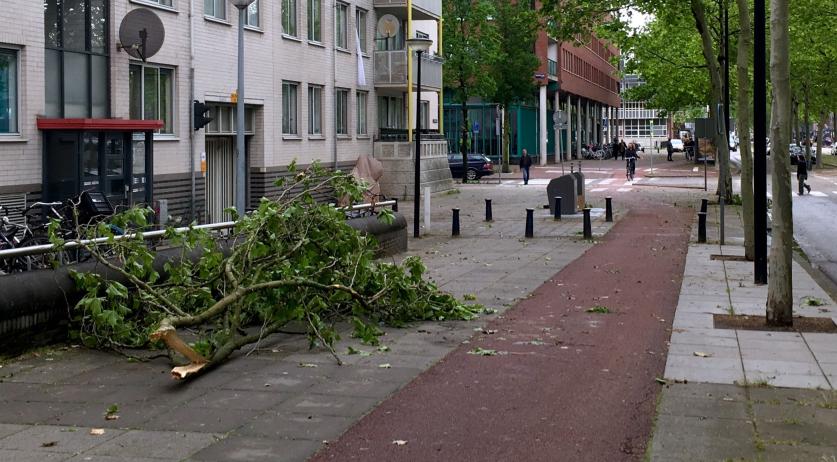 Severe thunderstorms that hit the Netherlands on Tuesday and Wednesday nights caused a lot of damage throughout the country. Many of the damage reports received on Thursday seem to involve "consequential damage" - roof tiles being blown off on the first night and water damage as a result on the second, or trees being weakened by strong winds during the first storms and falling over after the second, insurer Interpolis said to the Telegraaf.

Over the past two days, Interpolis received a total of 1,500 damage reports, 1,250 involving damage to houses and the rest damage to cars. After Wednesday night's storms, the damage reports mainly involved water damage and damage caused by lightning strikes. Damage caused by Tuesday's storms mainly had to do with strong winds. Noord-Brabant, Gelderland and Noord-Holland were hit the hardest, according to the insurer.

In Amsterdam Centrum alone, around 150 trees were blown over during the storms on Wednesday night and the early hours of Thursday morning, a spokesperson for the municipality said to Het Parool. "How many in the entire city, we don't know yet. But it's a lot." The capital's fire department responded to hundreds of reports of fallen trees. At the Hotel De l'Europe on Amstel, seven trees in a row were blown down. In the Red Light District narrow streets and alleys were blocked by three old trees not being able to stand up to the wind. On Herengracht one tree ended up in the canal. Five people sustained minor injuries during the storm, one of whom was hit by a falling tree.

The severe weather also caused problems at Schiphol - eight Transavia flights had to be diverted. In Udenhout, multiple rooms in a care center were evacuated due to flooding. According to Omroep Brabant, the care center's roof broke under the downpour, flooding the rooms. A whirlwind caused damage in Wilnis and Vinkeveen, according to RTV Utrecht. And downpours resulted in flooded streets throughout the country.

According to Weeronline, there were some 72,500 flashes of lightning in Dutch skies on Wednesday night and Thursday morning. Some areas got over 40 mm of rain - more than half of the 68 mm of rain that usually falls throughout the month of June. The strongest gust of wind was measured in Cabauw in Utrecht at no less than 127 kilometers per hour.