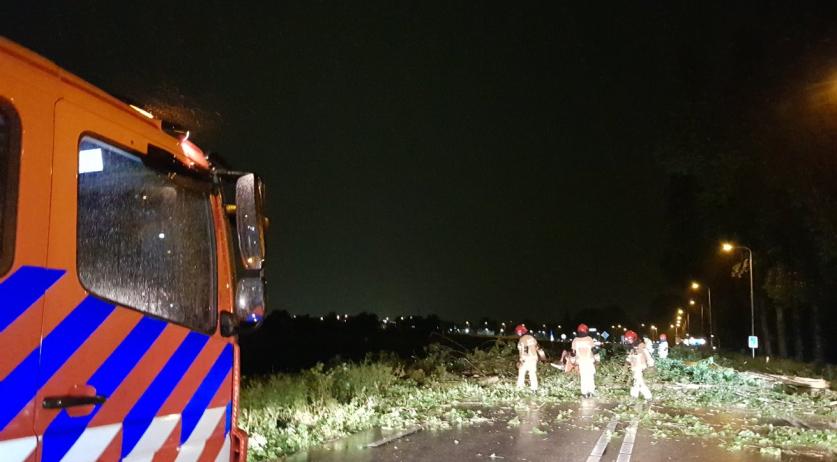 A second night of thunderstorms resulted in reports of damages and flooding throughout the Netherlands. Five people were injured in Amsterdam during the storm. One of them was hit by a falling tree. None of the injuries are very serious, NOS reports.

Control rooms of safety offices in Amsterdam and Noord-Holland Noord were particularly busy with calls, to such an extent that Veiligheidsregio Drenthe had to take over some of the calls, according to the broadcaster. The fire department in the capital received 150 reports of storm- and water damage over night.

A roof blew off a building and onto the street on Sumatrakade in Amsterdam Oost, according to AT5. In the Red Light District, three trees and a crane could not keep standing against the wind. The fallen trees are blocking a number of narrow streets and alleyways in the area, RTL Nieuws writes.

In Velsen-Noord in Noord-Holland, Werkhoven in Utrecht, and Beuningen in Gelderland, houses caught fire presumably due to lightning strikes.

Around the Vinkeveense Plassen a whirlwind caused a lot of material damage, local safety office Veligheidsregio Utrecht said. According to Weeronline, a wind gust of 127 kilometers per hour was measured in Utrecht

Some places in the Netherlands got up to 50 millimeters of rain in a short period, resulting in flooded streets and other water-related problems. From the western parts of the country, reports came of hail stones with a diameter of up to 4 centimeters. Whether anyone was injured by these falling rocks of ice, is not yet clear.

Schiphol stopped the work of its ground staff due to the bad weather. Eight Transavia flights detoured to Rotterdam, Belgium and Germany, according to NOS.

The storms also caused problems on the railways between Gorinchem and Leerdam and Delft and Rijswijk. Lighting strikes also interfered with the signals around Amersfoort. ProRail mechanics were able to resolve these problems by the start of NS' timetable on Thursday morning. At 7:30 a.m. NS only reported one problem - disrupted train traffic between Kampen Zuid and Zwolle due to a signals failure. Whether this is storm related, is not clear.

Meteorological institute KNMI initially only issued a code yellow warning for the southern provinces, but quickly extended it to the rest of the country. The warning was escalated to a code orange for all provinces, except Zeeland. At around 2:00 a.m. the warning was lifted for everywhere but the northern provinces. By 4:30 a.m. all warnings were lifted.