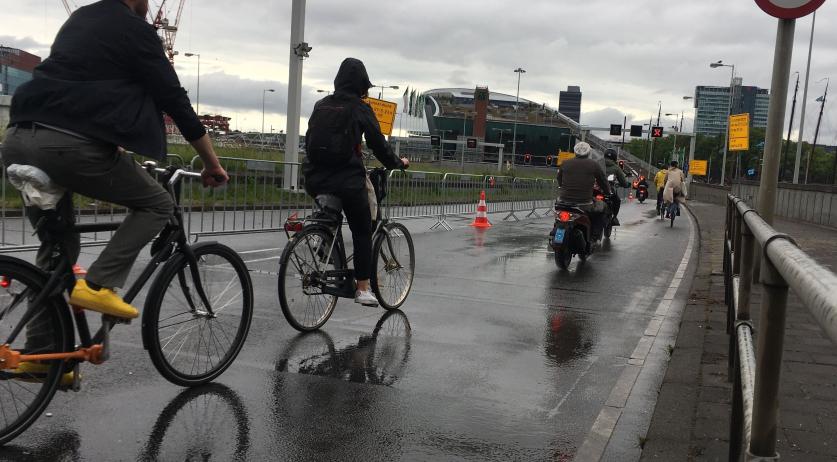 As a national one-day public transit strike was almost halfway finished in the Netherlands, traffic was already beginning to pile up on highways in the Netherlands from 3 p.m. on Tuesday. Drivers jammed up nearly 450 kilometers of highways by 4:45 p.m., up from roughly 300 kilometers of traffic jams 40 minutes earlier, according to travelers' association ANWB. While many people opted to work from home on Tuesday, or made other arrangements to get to work, school or university, but many of those who did commute tried to make an early exit.

Even before the normal rush hour period began, road traffic was already tricky on much of the A10 ring road around Amsterdam, and on the A1 from Hilversum towards Enschede, the A4 between Amsterdam and Den Haag, and the A12 between Den Haag and Arnhem. There were also problems on the A15, A16, and A20 around Rotterdam and south towards Breda.

The public transit strike led to a busier-than-usual morning rush hour, but nothing extreme, according to public works department Rijkswaterstaat. Traffic peaked at 328 kilometers of traffic jams on Dutch highways at around 8:30 a.m., Rijkswaterstaat reported. According to the service, that is not unusual for a rainy Tuesday morning. On all Dutch roads there were 696 kilometers of traffic jams at morning rush hour's peak, according to travelers' association ANWB.

Amsterdam opened the IJtunnel for cyclists, so that they could travel between Amsterdam Noord and Centrum with the ferries not running. A number of schools and universities rescheduled important exams and classes on Tuesday, but that was not the case everywhere. Students of Rotterdam art school Codarts had a sleepover at the school on Monday, to make sure they don't miss important rehearsals on Tuesday. Schiphol CEO Dick Benschop also decided to spend the night at the airport. "I didn't want to risk being late", he said to NU.nl.

There is a major public transport strike today, which means no train, tram, bus, or ferry service across the Netherlands.

To retain timely and efficient access to the city, Amsterdam opened the (previously car-only) IJtunnel to bikes and emergency services.

Airlines at Schiphol ended up having to cancel 44 departures and 42 arrivals while the strike was underway. Many travelers made use of the option to reschedule their flights for free, but the airport still expected some 200 thousand travelers on Tuesday. NS ran four trains per hour between Schiphol and Amsterdam Centraal during the strike, as per court order. While this was much less than usual, it was enough to make sure travelers were not left completely stranded. Benschop described the crowds at the airport as "manageable", but Schiphol still called on people not to come to the airport unless absolutely necessary.

Public transit workers are striking for a better pension system on Tuesday. The trade unions want to freeze the retirement age at 66 and to make it possible for people with taxing jobs to retire earlier. Other sectors will strike for this reason on Wednesday. According to the unions, many people with taxing jobs or who work in shifts have lost their health by the time they reach retirement.

"This concerns everyone", a striking NS workers said to NOS from Amsterdam Central Station. "This is a conflict with the government, not with the NS." He said that he feels supported by his employer, but wants to "reach the finish line" while he is still healthy. According to him, the professions train conductor and -driver fall into the 'taxing' category. "We experience aggression, suicide on the tracks, and have irregular rosters. Research show that people with taxing professions live ten years shorter. So it is not true that everyone is getting older, like the government says. The people for whom that does not apply must also be compensated, I think."

The fact that most of the Netherlands was aware of today's strike could be seen by the largely deserted train stations. People who did end up in the train stations were mainly tourists who were not aware that public transport wasn't running today.