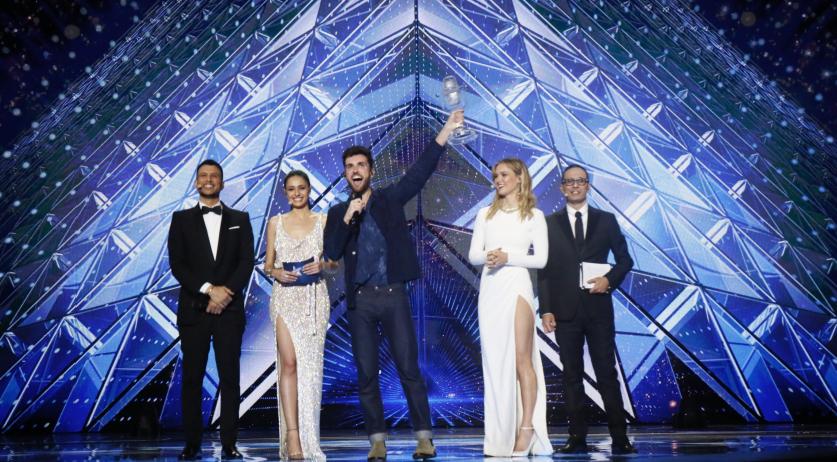 Less than 24 hours after being crowned the winner of the Eurovision Song Contest, Duncan Laurence is set to make his way back to the Netherlands on Sunday afternoon. "I cannot describe this in words. I am so happy. It is really a dream come true," Laurence said in the press conference following his victory early Sunday morning.

Laurence won with his polished pop tune "Arcade," which was already the bookmakers' favorite even before the successful semi-final round before a jury. He said he was extremely nervous during rehearsals on Saturday, and had to go back to focusing on the song and not the contest later that night.

"It helped me to sing the song the best I could," he said.

I'll never forget this! Thank you! ❤

Laurence was scheduled to appear on Jeroen Pauw's television show on Sunday night as a special program for broadcaster BNNVARA. He'll be joined by the last Dutch winner of the international competition, Getty Kaspers, who took the prize 44 years ago with "Ding-a-Dong."

Singer-songwriter Ilse de Lange, who placed second at Eurovision five years ago as one-half of The Common Linnets, was also slated for the broadcast. She served as Laurence's mentor during this year's competition, and also on The Voice of Holland, which he won in its fifth season on the air.

Laurence was asked at the press conference what he wanted to say to De Lange, but declined as he had not yet had a chance to speak with her in private.

"I'm sorry, you'll have to wait until tomorrow!" he added with a laugh.

He did confirm a desire to collaborate with Sweden's Eurovision performer, Jon Lundvik, in the near future.

The victory also brings the 2020 Eurovision Song Contest to the Netherlands. AVROTROS will be the host broadcaster for that competition. "We will give you all the support you need," Eurovision Executive Supervisor Jon Ola Sand told the Dutch broadcaster's representative Emilie Sickinghe. "You have very little time. You have to hit the ground running," he added.