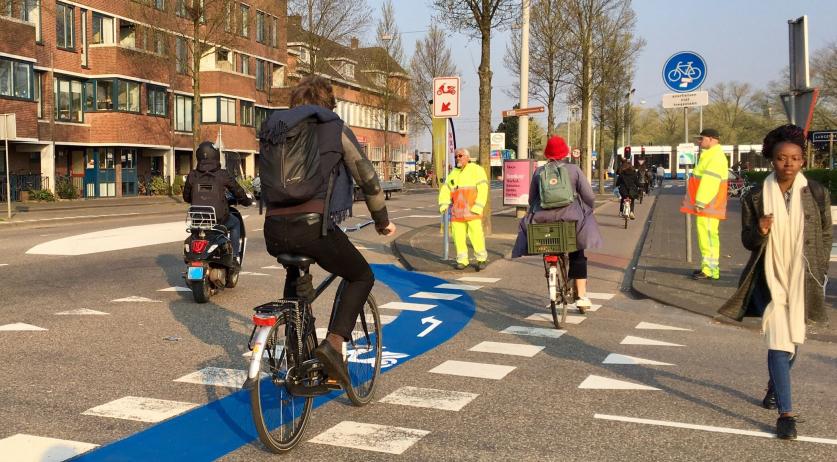 All types of scooters, even the slower ones with blue license plates, are banned from most Amsterdam bike paths from today. But the ban, as well as the obligation to wear a helmet, will not be immediately enforced. The 500 enforcement officers in the Dutch capital are threatening to strike if the municipality does not meet their demand for better equipment, the Volkskrant reports.

The municipality already announced that for the first month only warnings will be issued against scooter riders who drive on bike paths or don't wear a helmet. During this month, traffic regulators will be deployed throughout the city to instruct scooter riders on where they are and aren't allowed to ride. After that, violators will be fined 95 euros. Enforcing the ban and helmet obligation, and issuing fines, will mainly be in the hands of the enforcement officers.

But the enforcement officers in Amsterdam will not enforce the ban on scooters driving on bike paths until their demands are met, according to the Volkskrant. They want to be equipped with a baton, pepper spray and a bodycam, among other things. Enforcement officers are increasingly tasked with maintaining public order. They face a lot of aggression and want to be able to defend themselves. The enforcement officers in Amsterdam will be campaigning all week. They won't write out fines for anything, and are threatening with a 3 hours strike on King's Day.

In February Amsterdam mayor Femke Halsema agreed to equip enforcement officers with bodycams, but she is against arming them. Instead the enforcers in the city will receive extra support from the police.

Amsterdam implemented this scooter measure in an effort to relieve pressure on the overcrowded bicycle paths in the city. The measure was a long time coming - it took the municipality nine years to get the ban implemented. The ban was initially not allowed, because traffic rules are determined nationally, according to NOS. But in 2017 the lower house of Dutch parliament passed a law that made it possible for municipalities to implement this measure. The law stipulates that scooters can only be banned from bike paths in busy places. According to the Amsterdam municipality, this applies to around 80 percent of the bike paths within the A10 ring road.

Not everyone is pleased with this ban. A petition against the measure was signed over 44 thousand times. The initiators believe that moving scooters to the road will decrease traffic safety - scooter riders will be in danger among the much faster cars, they said.

On Saturday some 50 scooter riders caused havoc in the city. They gathered on Mercatorplein in Amsterdam-West at around 3:00 p.m., and then broke up into smaller groups to leave a trail of destruction in both West and the city center, NU.nl reports. They rode on the bus lanes and in between pedestrians, threw bottles at passers-by, and tagged road signs with spray paint. Six of them were arrested and their scooters were seized.

A spokesperson for the Amsterdam police could not tell NU.nl what the scooter riders' motive was, but said it likely had to do with the ban being implemented on Monday.