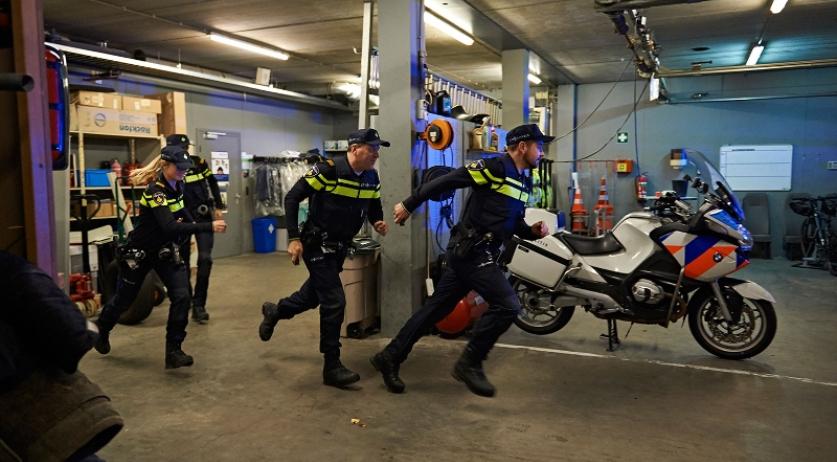 The tram doors wouldn't immediately open after a man opened fire on a tram on 24 Oktoberplein in Utrecht at around 10:45 a.m. on Monday morning, according to one witness. Multiple people were injured. Journalists at the scene report seeing a body covered by a sheet, according to NOS. Though the authorities have not yet confirmed whether anyone was killed.

A witness of the shooting told NRC that a man "with a big gun" stood up in the tram and started shooting around him. "I was sitting in the back of the tram. He shot around him, but seemed to aim at people sitting on the benches - everyone dove away", the woman said to the newspaper. "The conductor couldn't get the doors open immediately. Two boys next to me kicked a window out, through which I fled outside. More people did that."

Local resident Jimmy de Koster also saw the shooting happen. "I came from my work when it happened", he told RTV Utrecht. "I was standing at the traffic lights on 24 Oktoberplein and I saw a woman lying, I think she's between 20 and 35 years old. At that moment I heard three times bang bang bang. Four men ran to her and tried to drag her away and then I again heard bang bang bang and they let go of the woman. Complete chaos there."

The national coordinator for counterterrorism and security NCTV increased the threat level in the province of Utrecht to 5 until at least 6:00 p.m. 5 is the highest threat level in the Netherlands, and it is implemented when the chance of an attack is critical or if an attack already happened. According to the NCTV Pieter-Jaap Aalbersberg, the incident in Utrecht has all the characteristics of a terrorist attack.

During a press conference he said that the authorities are hunting one suspect. He called on the public to listen to the authorities' instructions and give the room to work. The municipality of Utrecht advised people to stay indoors while the search of the suspect is ongoing.

Sources within the police told NOS that they are looking for a red Renault Clio.

With the increased threat level, several institutions and organizations shut their doors in Utrecht on Monday. The university there is asking students to stay indoors and telling employees not to leave until authorities deem it safe to do so. The Hogeschool Utrecht also locked entrances, telling students not to visit the campus while the extra security is necessary.

All trams and buses in Utrecht are currently halted.

All mosques in the city were reportedly closed. The Ulu Mosque closed after close consultation with police, a spokesperson for the religious center told De Telegraaf.

Meanwhile, security was increased at sites across The Netherlands, even as NCTV kept the threat level at 4 countrywide. More security was seen at Schiphol, the broadcast center in Hilversum, and Parliament.

The police call on anyone who has photos or video of the incident to submit it to them, and not to post it on social media.

The Red Cross launched a website where Utrecht residents can let their loved ones know that they are safe.