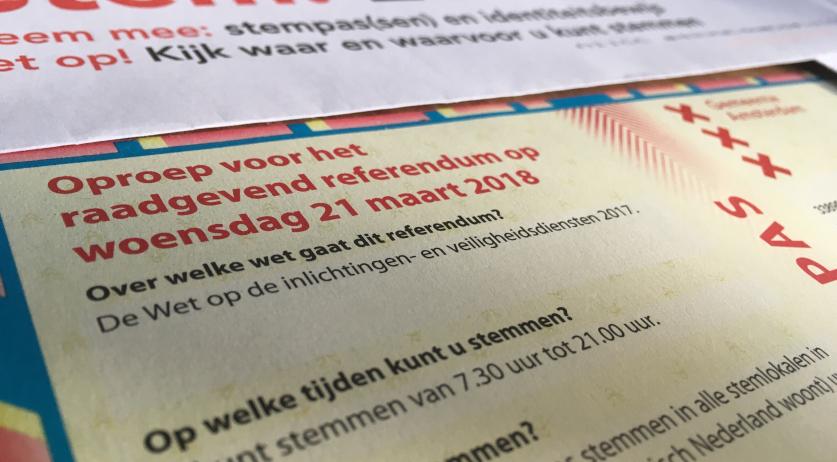 Today around 13 million Dutch can vote in a referendum on whether or not to implement a new law for intelligence services AIVD and MIVD. Polling stations opened at 7:30 a.m. and most will remain open until 9:00 p.m.

This new law - officially called the Intelligence and Security Law, but also referred to by opponents as the Big Data Law - gives the Netherlands' two intelligence and security services more power. The biggest change is that the AIVD and MIVD will be able to tap telephone and internet traffic on a large scale. The services will also be allowed to perform hacks more often, and on a larger range - where the services can now only hack a specific suspect, the new law allows them to reach the suspect by hacking the computer of a housemate, for example. The new  law also gives the services the capability of storing DNA material for investigations. The expansion of powers is balanced with more supervision on the services.

The outcome of the referendum is only valid if at least 30 percent of voters cast a vote in it. Invalid votes and blank votes also count toward the turnout. According to recent polls, there is a good chance that the 30 percent turnout will be reached. Likely because the referendum is held on the same day as the municipal elections, so voters are already at the polling stations.

If the referendum is valid and a majority of voters vote against the law, parliament will have to re-examine and re-debate the law. But they can choose to leave the law unchanged, as this is only an advisory referendum and the outcome is not binding. In the Ukraine referendum a majority voted against a trade agreement between the European Union and the Ukraine. The government compromised by adding an amendment to the agreement to address opponents' concerns. The same could happen here.

If a majority votes for the law, the law will be implemented as planned on May 1st.

The law will be evaluated in two years' time, to make sure that citizens' privacy is sufficiently guaranteed, according to NOS. A lawsuit against the law is also currently in the works - opponents believe that certain parts of the law are in violation of human rights.