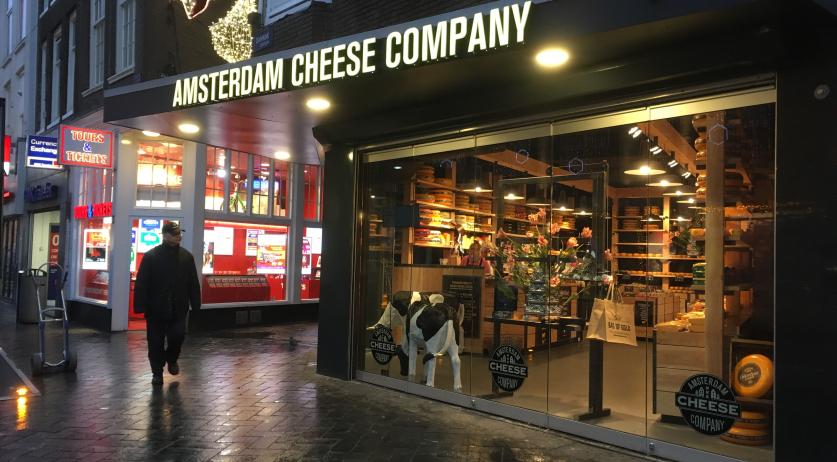 Amsterdam implemented this ban on October 5th, without revealing plans to do so beforehand. The city hopes that the ban will increase the diversity of stores in the city center, which is currently dominated by a "mono culture" of waffle stores, Nutella shops, ice cream parlors and souvenir stores. Amsterdam believes that the Damrak store of the Amsterdam Cheese Company is aimed at tourists and therefore needs to close.

"In the center - 'postcode 1012' - there are too many of the same stores", municipality spokesperson Vera Al said to the Volkskrant. The ban is aimed at reducing the number of tourist stores, and increasing diversity in the stores located in the area. And these rules also apply to the Amsterdam Cheese Company, Al said to the newspaper. "Because there too, the assortment, the presentation, the advertising messages, and the business management are only aimed at tourists and day-trippers." The fact that company operates in English also played a role.

The ban, and the fact that the Amsterdam Cheese Company store on Damrak is included in it, caught owner Quirijn Kolff completely off guard. The Amsterdam Cheese Company signed a 15 year long lease contract for the Damrak store, the fifth location in Amsterdam, weeks before the ban was implemented. "Our branch on Damrak would have been rebuilt, and on October 5th we heard about the decision", Kolff said to the newspaper. "Then we already signed a long term lease for our new store, commissioned an architect for the design and a contractor already started work. If I had known that the ban decision would be taken, I would never have made all those investments."

The cheese company's lawyer, Tom Barkhuysen, thinks that implementing a ban from one day to the next goes against legal certainty. "With this you victimize bona fide entrepreneurs", he said to the newspaper. He added that the municipality never made clear exactly which criteria was used to decide whether a store is a tourist store. "Must the Amsterdam Cheese Company stick a 'no tourists allowed' sign on its door?" the lawyer asked the Telegraaf.

The court will rule on this case in January. Until then, the Damrak store of the Amsterdam Cheese Company can remain open.