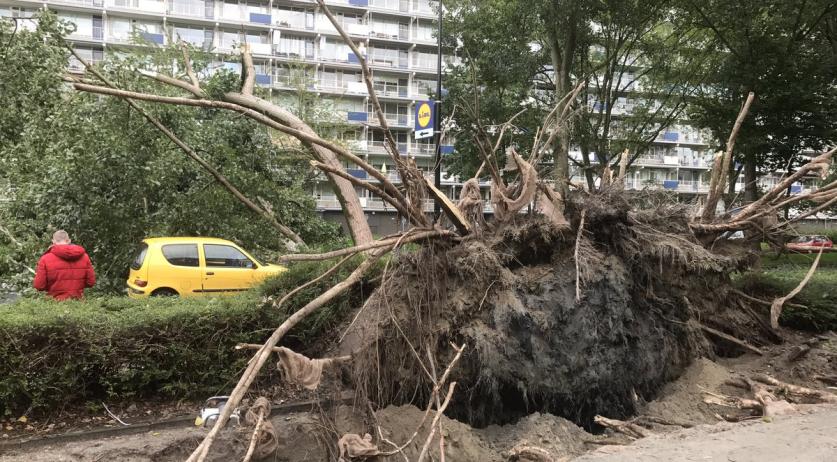 The first autumn storm to hit the Netherlands this season, is starting to take its toll across the country. Schiphol had to close down a number of runways due to the strong winds. The A13 highway between Delft and Rotterdam was closed for a time after a tree fell on a car. And NS is running fewer trains on a number of routes.

The closed runways at Schiphol is causing delays in flights. The airport advises travelers to keep an eye on the situation via Schiphol's website, app or through their airlines. KLM already scrapped 60 flights to destinations within Europe as a precaution. The airline hopes to relieve pressure on the runways in this way and thereby prevent delays on other flights. Intercontinental flights are departing on schedule at this time.

A blown over tree caused traffic problems on the A13 between Rotterdam and Delft on Wednesday morning, AD reports. All three lanes towards Rotterdam were closed until around 9:00 a.m. The driver of the car the tree fell on, escaped the incident uninjured.

Two lanes were closed on the A9 near Amstelveen after a truck trailer blew over. And on the A9 from Alkmaar to Amstelveen, a toppled tree is lying on the road. Only one lane is open.

On Mozartlaan in Schiedam a tree toppled and a two pregnant women in a car crashed into it. Paramedics checked them over at the scene, according to AD. It's not clear whether they were taken to hospital. As a precaution, another tree on the street was taken down, according to police officer Wilco Berenschot on Twitter.

The dike between Enkuizen and Lelystad is closed to freight traffic and cars with trailers.

NS is running fewer intercity trains on the route between Den Helder and Zaandam. Shipowner Doeksen scrapped a large number of crossings over the Wadden Sea, according to RTL Nieuws. The fast ferry between Hoek van Holland and Maasvlake is also not traveling at the moment.

In Rotterdam-Noord nearly 6 thousand homes currently have no power. According to grid manager Stedin, the neighborhoods of Blijdorp and Provenierswijk are affected. It is not yet clear whether the storm caused the power outage. Stedin is working on restoring the electricity to the affected homes, AD reports.

According to Dutch public works department Rijkswaterstaat, the high point of the storm is only expected during the late morning or early afternoon. "Throughout the morning, road users have to be extra alert due to the storm", a spokesperson said to RTL Nieuws.

A code orange weather warning for strong winds is currently in effect for the coastal provinces, and a code yellow for the rest of the country.