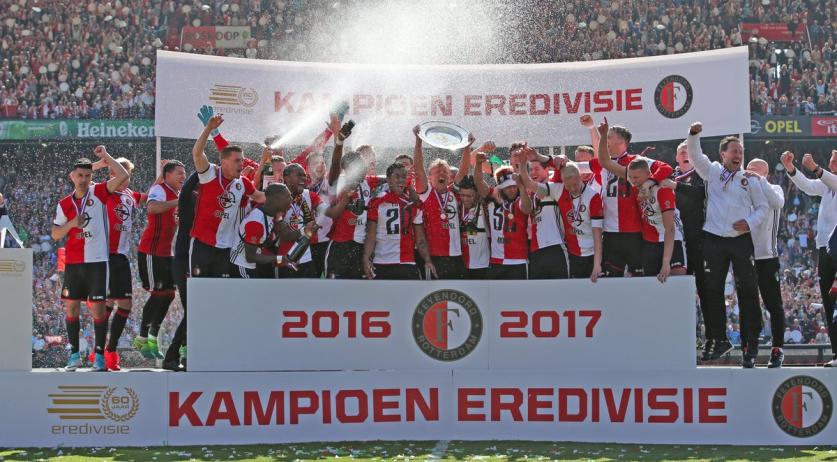 A total of 76 people were arrested in Rotterdam after Feyenoord beat Heracles Almelo 3-1 on Sunday and thereby became the national champions for the first time in 18 years. According to the police, there were "no major incidents'' during the celebrations. Feyenoord will be officially congratulated and honored in a ceremony on Coolsingel around noon on Monday.

People were arrested for a wide number of offenses, including discrimination, insult, violation of the Opium Act and public intoxication, AD reports. Virtually all incidents were settled with an admission of guilt or settlement. Four people spent the night in jail for a fight on the Binnenrotte. The police also reported that seven of the 29 people arrested last week and ordered to report to the police station during Sunday's match, failed to do so. The Public Prosecutor is considering what the consequences will be.

Due to a partial alcohol ban in the city center on Sunday, the police spent a lot of time confiscating alcohol from the about 100 thousand Feyenoord fans who were in the city for the match. The police estimate that about 10 thousand liters of beer and other alcoholic beverages and 270 kilos of fireworks were confiscated.

By midnight paramedics responded to help 160 people, according to police figures. 24 of them were taken to a hospital, 8 by ambulance.

Rotterdam mayor Ahmed Aboutaleb is satisfied with how the Feyenoord fans behaved themselves, he said to NOS. He previously threatened to cancel the inauguration ceremony on Monday if supporters failed to behave on Sunday.

According to the mayor, Sunday was a great day and the celebration was controlled and joyful. He is also delighted that Feyenoord managed to control the tremendous pressure on them and nabbed the title. "Feyenoord had to perform, and so they did", he said. With a "beautiful title" as the result.