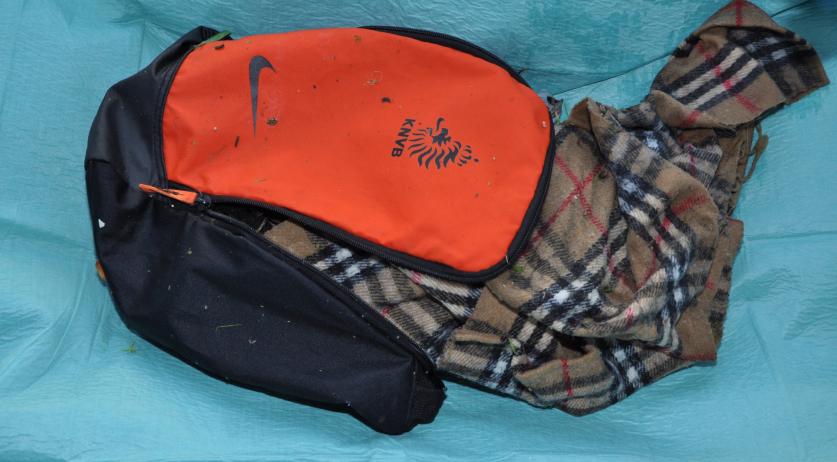 The police released more details regarding a baby found dead at Amsterdam's Sloterplas last month on Opsporing Verzocht on Tuesday. Investigating officers hope that information from the public could lead to the discovery of the baby's mother. The baby boy was found on Wednesday, June 8th, by a passerby. The cause of his death is still unclear, as well as how long he lay in the bushes. The baby boy was no more than a few days old and was likely born after 36 weeks of pregnancy. He had a very low birth weight and weighed only about 1,700 grams. The newborn was wrapped in a towel and placed in a black and orange shoe bag of the brand Nike. He was dressed in a Mickey Mouse romper and had a Mickey Mouse bib around his neck - these are sold as a set at Primark. The police hopes that someone can link these clothes to the child's mother. (story continues after pictures)

Police investigation also revealed that the bag spent some time in the water, and that it was not rainwater. The police believe that someone took the bag out of the Sloterplas and left it in the bushes. Investigating officers would like to make contact with a few key witnesses including anyone who saw the bag on the eastern bank of the Sloterplas, saw the person who left the bag there or saw someone removing the bag from the water. They would also like to talk to anyone who can link the bag and baby's clothes to his mother and anyone who knew a very pregnant woman who suddenly does not have a baby. At this stage it is unclear whether the boy was born with medial help, but the police urge the medical community to share any available information about the boy. Those who are uncertain what they can say due to professional secrecy, should ask their profession's advisory board.