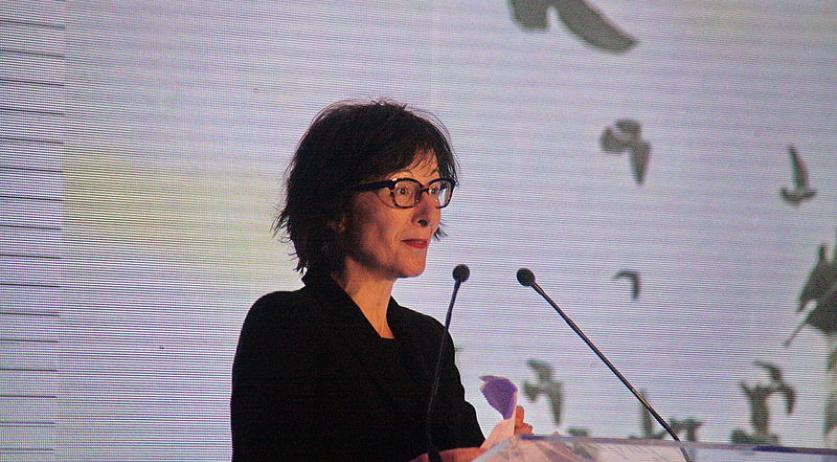 French journalist Florence Hartmann was arrested by the International Criminal Tribunal for the former Yugoslavia (ICTY) in The Hague last week. The conditions under which she is being detained, are being met with international disbelief. According to her lawyer, Hartmann is being kept in solitary confinement, with a light burning 24 hours per day and checked on every 15 minutes. In 2007 Hartmann published a book about the ICTY, in which she states that the tribunal withheld and ignored crucial documents about the mass killings in Srebrenica in 1995. In 2009 she was convicted of "contempt of the tribunal" and sentenced to paying a 7 thousand euro fine. The fine was later turned into a 7 days in prison sentence because she never paid. Hartmann insists that she transferred the money to a French account. Last week Hartmann was arrested while attending the verdict against former Bosnian Serb leader Radovan Karadzic. While standing among protesters UN employees and Dutch police arrested her. According to the UN, by arresting Hartmann they were acting on an outstanding arrest warrent from November 2011 - when Hartmann's sentence was converted from fine to prison sentence. In a telephone interview with British newspaper The Guardian, Hartmann complained about the "bizarre position" she is in. Hartmann could watch Bosnian Serb military leader "General Ratko Mladic walking around the yard and associating with other prisoners wile I'm locked away in a cage. The outrageous thing was to see the UN and Dutch police kick away women from Srebrenica and survivors from the camps who were trying to protect me from arrest, after all they've been through." she said to the newspaper. Her lawyer, Geunael Mattraux, is furious that no one from the tribunal could address Hartmann's situation over the weekend. He was told that no one could address his complaints because it was Easter weekend. "A journalist is being detained in conditions - isolation, segregation, suicide watch - that were supposed to have been created for war criminals. It is incomprehensible", the lawyer said to The Guardian.