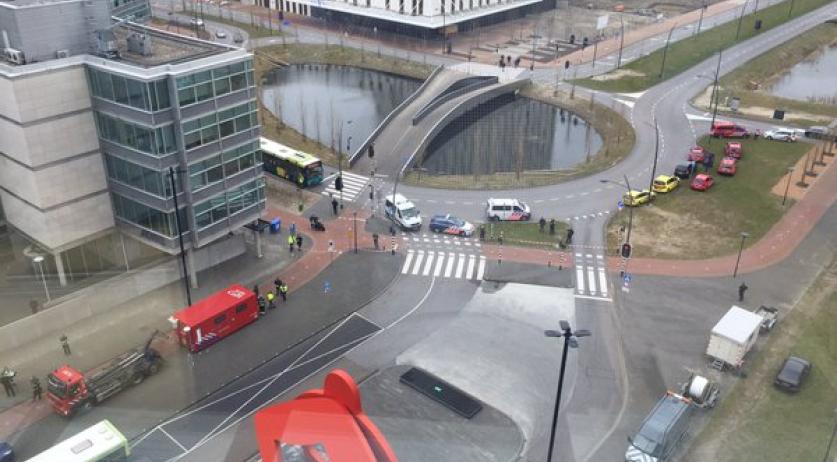 Arrest made as SWAT team evacuates Brussels to Amsterdam train

A train traveling from Brussels to Amsterdam was stopped at Hoofddorp station on Tuesday after a "suspicious person" was signaled. Witnesses saw a SWAT team dragging a person from the train, NOS reports. NS warned that delays could last to 8:00 p.m., but later revised that down to 4:30 p.m., just before the evening rush hour takes hold. All passengers were removed from the train by responding police, who escorted them to a nearby hotel. They were interviewed by police and then released by 3 p.m. Officials said it was likely they would be transported by bus likely to Schiphol airport or Amsterdam Centraal. The Hoofddorp station was evacuated at around 11 a.m. The international train was closest to that station when the police response began. It was still closed to the public as of 2:30 p.m., and trains were not allowed in or out of the Hoofdorp area. A reason for the continued response was not given, but police did say they made entry into the station by breaking through several windows. Two package deliverers were arrested for not obeying police orders. They refused to stop their delivery bus. A search revealed nothing suspicious. Another man was searched for unknown reasons, according to a witness on Twitter. According to Hart van Nederland, employees working in buildings surrounding the train station were told to stay inside and keep away from windows. Hart van Nederland is broadcast by SBS6, majority owned by Sanoma. Based in Hoofddorp, the headquarters of Sanoma also faced its own evacuation on Tuesday.

The police finally released the train about two hours after stopping it. Nothing suspicious was found. The train will not continue its journey. As far as is known this is not connected to terrorist attacks committed in Brussels earlier on Tuesday. NS warns that delays caused by this police action could last until 4:30 p.m. There were no trains traveling between Leiden Centraal and Schiphol airport throughout much of the day, and passengers were instead transported by bus. Travelers should factor in 30 to 60 minutes of additional travel time. The NS also advised people traveling between Leiden and Amsterdam Centraal to rather take a detour via Haarlem. Those traveling between Leiden and Schiphol could do so via Sloterdijk. https://twitter.com/joostschippers/status/712238542165053441